Just days after our arrival at Swan Lake, our 12 year old grandson, Bryce arrived from Washington state to spend two weeks with us. For

him, the first stop of interest was somewhere to ride a roller coaster and so we visited Worlds of Fun, in north Kansas City. While there, Bryce road five major roller coasters as well as many other rides. Even

After a few days we also took him back to the KC area to spend a day at Science City as he is very much interested in that as well. Science City is one of the attractions now located in the old rail road depot that once served eight major rail lines and all of that part of the country. Today, there are no trains at all in the area, but it has become a major tourist attraction. Science City contains many different science based attractions and many of them are hands-on with activities to perform and things to ride or do. It also contains a planetarium and a science theater.

Both of these trips were enjoyed by all and are especially recommended for those who travel with children. Even 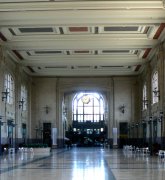 we older kids managed to enjoy both, although I don't know that I would take the trip to Science City if I had no children along to enjoy it as there isn't that much for lone adults. The planetarium would be good and the science theater.

After two weeks with us, it was off to the KC airport and back home for Bryce to prepare for the coming school year. For grandparents, it was back to our more staid routines and to more sedate attractions. Next on our list of things which must be seen while in this area was Watkins Mill State 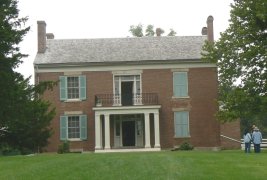 Park. It is located near Lawson, Mo and is the grounds and mill of an early settler in the area. What makes this mill particularly interesting is the fact that all of the original equipment  from the factory is still in place there and most would operate if there was someone to work the mill. It was powered by a steam engine and the engine would need major work to restore, but most other machines seem to be in working order. The house and grounds are also part of the park and it also still has 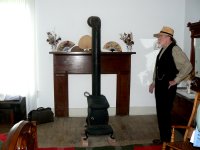 the church and the school buildings which the Watkins family funded and donated the land for. The property was in the hands of descendants of Mr. Waltus Watkins for three generations and even once sold the mill was never stripped or salvaged. When discovered by purchasers at an auction in the 70's that the mill was still intact, they approached the owners of Allis Chalmers Tractor company, who the purchasers were employed by, and the factory was preserved and in time donated to the state.Today, the house has been restored and many of the furnshings have been returned. 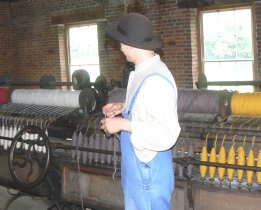 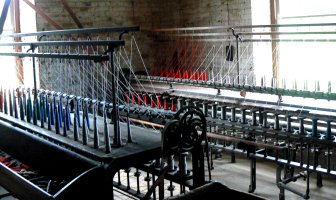 The house and mill are not open except by tour but the fees are very reasonable at $2.50 each for seniors. The tours are lead by 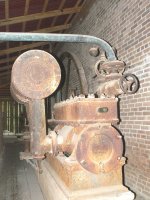 volunteer docents and they are well informed and very good at what they do. We were also able to visit with two of the park employees, one of whom was working in the mill in period clothing. This park is well 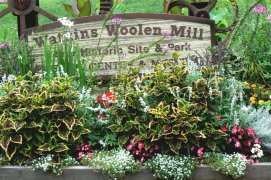 off the beaten path but it is beautiful as well as interesting. The grounds are today heavily timbered, even though they were once mostly farm fields and there is a nice campground as well as several picnic areas and ample parking.

For those who are so inclined, there is a small gift shop and a fair sized museum. The park is about 1/2 hour drive from I-35 and not far north of Kansas City. Each tour takes about an hour or just a little bit more and they time they to make if very easy to move from one tour to the other. It is about a five minute walk between the two buildings.  I think that anyone who takes the time will find this to be a very worthwhile stop.

Our next outing was to visit the boyhood homes of two of America's favorite sons who grew up in this part of Missouri. The first stop was in the small town of Laclede to spend some time at the home of John J (Black Jack) Pershing. General Pershing was the son of a local shopkeeper, turned farmer when times got tough. As a boy, Jack Pershing learned work hard but did not want to stay

One of the more interesting things that we learned was how he got the nickname, Black Jack. Turns out that it had nothing to do with cards, but rather the fact that he made a name for himself while leading all black troops, both in the US and later in support of Theodore Roosevelt at the battle of San Jaun Hill. Newspapers picked up on what jealous older officers who he had bypassed in route to promotion called him, but even then it was not 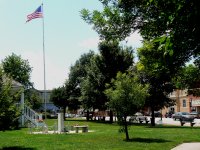 From there we traveled to the east about 30 miles to visit the place where Walt Disney grew up and to see the barn where he used to come to dream, as well as to visit the town which "Main Street" in Disneyland was modeled after. it was not difficult to see the connection. As a young boy, Walt Disney's family moved from Chicago to the town of Marceline, MO and he very quickly adopted the community as his home, which it continued to be for the rest of his life. Even today, the community has a festival in his honor, which began while Walt himself could still attend. He never forgot his roots and always told friends that there was no better place on earth for a boy to grow up.

We try and visit some new area each week and our next stop was the Amish/Mennonite/German Baptist community of Jamesport. The area does have some variation in living practice but most of the religious 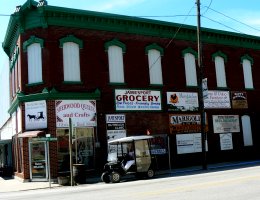 community are of the "Old Order" beliefs and live in that way. No area is completely segregated today and even Jamesport now has a United Methodist Church, although a very small one. Like all strictly religious, conservative communities, this is a very peaceful, friendly, and safe community. Unless there are outsiders in town, the most serious crime that takes place is usually related to proper parking of horse teams, versus automobiles. The horse and buggy is more common in the area than cars.

The Old Order Amish are the most strict in not participating in modern inventions, with no use of electricity in their homes, businesses or barns and all farming is done with horses. As far as I could tell, none of them own even a car or truck of any kind. Others of the community do use electric power in their barns but not in their homes, while some others will have tractors and modern equipment for farming, but use the horse and buggy only when attending church. The diversity makes for some very interesting contrasts in the community. All of them seem to get along very well and they also do business with each other.

Many of the local farmers, especially those not using tractors, have turned to growing produce and we saw a great deal of activity related to that business. Most of the businesses of the most conservative folks were not in town as all of them seem to much prefer to live on the farms.The most conservative of the residents do not even use electrical power in their stores. Stores have ceiling fans and other things which are powered by air-motors and the compressors for the air operate with power from a diesel engine. Even the refrigerated display cases are cooled by diesel power. For lights, these businesses have gas flames.

This community was a fascinating place to visit and we would highly recommend that you take time to visit. 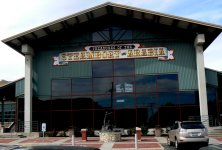 the Steamboat Arabia.The steamboat was in business of transporting cargo and passengers up the Missouri River to supply the new towns and stores which sold supplies to the settlers of the west. Shortly after leaving Kansas City with a full load of cargo, she hit a snag and sunk very quickly, in 1856. After 132 years, she was located in a field buried in dirt and more than 1/2 mile from the modern river channel.

She went to the bottom in only a few minutes and so nothing was removed from her cargo, but she was in shallow enough water that she sat on the bottom with the upper deck above water and so not one passenger or crew member was lost. By morning the following day the rushing water had scoured the mud from under the bottom to a point that nothing showed above the water. When she was recovered, it was discovered that part of what happened also was that the upper decks and pilot house were washed off of the boat and carried down river.

When she was found by armature treasure  treasure hunters in 1988, she still had nearly all of her cargo and it had been sealed in and buried with no oxygen and so nearly everything was still intact and recoverable. As a result the museum has the largest collection of goods from that time in history of any place in the world.The major part of the displays are from the cargo of the steamboat. 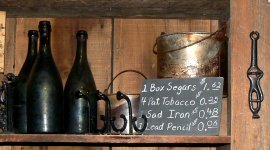 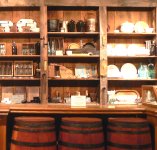 All told, this is a museum that can easily occupy two to four hours, depending upon one's interest in early Americana.