This map shows where Team Buffalo is stationed. It is a base that is for the Iraqi Army with one the US Army battalion. To the right of their location is the border with Iran. 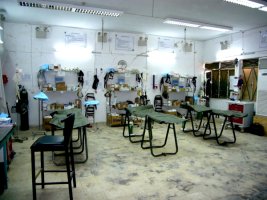 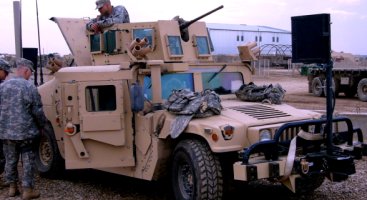 "Republican Guard Logo painted on one of the hatches of the vehicles in the bone yard here. It's kind of curious that the vehicle is there, as most of the equipment is captured Iranian equipment from the Iran Iraq war. There is some old American equipment there, provided to the Shah when he was in power."

The second picture is of the US Army aid station on the base, to contrast with that posted earlier of the one for the Iraqi army. In the third picture is the latest in HMMV equipment.

"HMMV upgrade - this is my vehicle. Amazingly we were two of the first ten vehicles in the country to get the latest and greatest armor upgrades for the HMMV. The side armor, the majority of the threat direction is about twice as thick as before. Of course it comes at a cost, the doors now weigh about 500 pounds each and it further overloaded the vehicle. As loaded when rolling on missions it now weighs over 15,000 pounds, the maximum gross vehicle rating for the HMMV is 12,200 lbs." 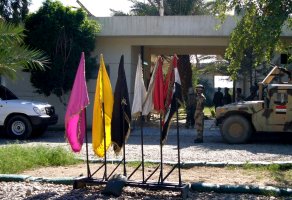 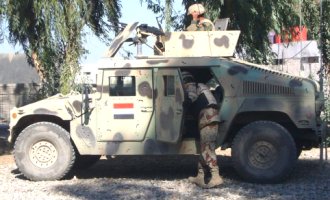 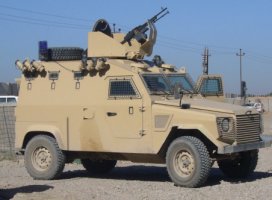 "I took this picture of the Iraqi Headquarters building. The flags represent the five companies in the Battalion."

"This is an Iraqi Army HMMV. Yes, it's the same as the American, either provided by us, or possibly bought by the Iraqi government, right off the factory floor. The battalion has 14 of them. The camouflage pattern is the same as the original American Dessert cammo pattern, seen mostly during Dessert Storm. We never painted our vehicles that way though, just sand."

"IA Land Rover - These are the other armored vehicles the Iraqis have. They are made under license in Turkey. According to the book, the armor
will stop a 7.62 mm bullet (.30 caliber), but since they are significantly lighter than our doors, I wouldn't want to test it." 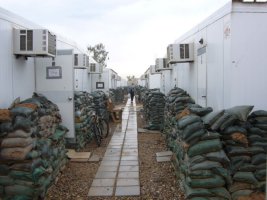 "LSAA Housing - During my most recent trip to Logistic Support Area Anaconda (I believe the largest base in Iraq) I took this picture of how
"the other half" lives. These are the trailers that house the majority of Soldiers in Iraq. Each room is for two Soldiers, I'm not sure exactly how big the rooms are. The sand bags are incase of a mortar attack, it gives something for people inside to hide behind. Rarely do mortar rounds come in that we (the American Forces) don't know at least a few seconds before impact - the advantages of ground surveillance radar. We also attempt to shoot back. In a couple of places at Anaconda there are Phalanx gun systems - look to be the same as on naval ships. I'm guessing to shoot the mortar rounds down, since it was designed to shoot down missiles before they impact ships."

I want to add one additional thought of my own to this new page. If you want to know a lot more about what Ken and Team Buffalo are dealing with, and what seems to me to present a pretty accurate picture of what is happening there, see if you can locate a copy of the Oct. 18 issue of the "Wall Street Journal." In an article written by Greg Jaffe there are a number of quotes from members of the team which this team replaced at the duty station where Team Buffalo now serve. The story is titled "Problems Afflict US Army Program To Advise Iraqis." The newest team to arrive on the base where Ken is stationed is made up of "Regular Army" so it does seem that things are changing, or at least beginning to. Team Buffalo was one of the last teams to be trained prior to the First Infantry Division taking responsibility for this transition program and the training was moved from Ft. Hood to Ft. Riley.