On April 13, 2009 we arrived back at East Fork park, and were once again welcomed by the staff here. We are parked once again on site number 49, the same spot as last summer. While we had only expected to be here for a month or six weeks this time, it now looks as though we will be here most of the summer, due to surgery that Pam is going to be having on her ankle. I'll post more on this as time progress.

While in Florida for the winter a story began which is finally reaching an end. On Jan. 5, 2009 while working at the Shark Valley Visitor Center, Pam slipped off of the curb and fell, injuring her right ankle. When the ankle was getting worse, on Jan. 10 she was refereed to a doctor by our supervising ranger, and so began a story that is difficult to believe. Due to failures of of an Everglades NP employee to help, the federal version of workman's comp was impossible to work with. 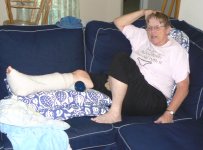 No thanks to the federal health services, on May 8 Pam was finally able to have the surgery that was needed to repair her injured ankle. On July 1 was her big day! The doctor said that she was finished with crutches, with the orthopedic boot and can finally wear a shoe again and walk with out assistance. she does still have an ankle brace to wear when outside and she will have physical therapy three times weekly for at least two more weeks, but she is on the mend at last! 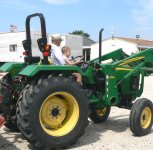 One of the great things about life as an RVer is the interesting people you meet and the vehicles that visit your locations. Last week we had a traveling "rat rod" owner stay with us. Both the trailer and truck have been restored mechanically to be sound for travel and the interiors of each has been made quite nice and modern. But with a "rad rod" you pride yourself in leaving the exterior to look just as it did before restoration. These folks were very nice and had quite a story to tell. Another fun thing that we have done since returning was to give our four year old grandson his first experience at driving a tractor. 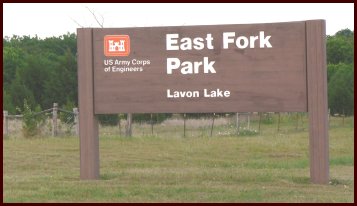 After a three week visit with our friends Bud & Dayl Davis, we moved into our summer home for the summer. We were volunteers for the Army Corps of Engineers at Lavon Lake, staying at East Fork Park. The Corps asks for twenty hours total per week for each site. Since we like to keep busy, we nearly always work more than the minimum number of hours and this was no exception. 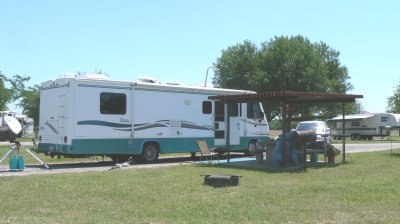 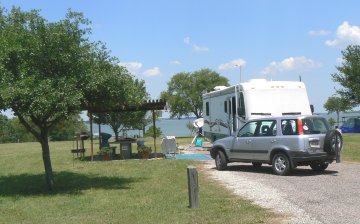 Our immediate supervisor was a young ranger named Matt Faulkner, who seems to really have his act together. With the staff here so short handed everyone has to do more than one job and all seem to take that in stride and charge on. One big problem for the Corps of Engineers parks is that as a part of the Army, most effort, talent and money is all engaged in war in the Middle East, and in the Ft. Worth District they are building a wall on the Mexican border, so the crews who run the lakes here in the states get very little support. In spite of that fact, this staff all work very well together and to have a great deal of respect for and appreciation of the volunteers. 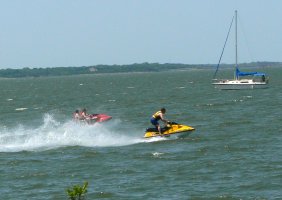 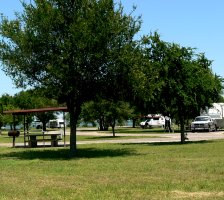 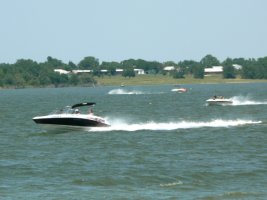 With this a lake park, most of the activities here revolve around water. On week ends the campground is very busy as are both boat ramps at this park. The campground has 50 sites with water and electricity as well as about a dozen tent-only sites and a new horse park with water, electricity and horse pens. There are toilets with showers in all three sections of the campground and a dump station at the gate. There are also numerous picnic areas and a group area which can be reserved. With the park located only about an hour from Dallas there is a great deal of summer use. We also have several full-time RV folks staying here as the rates are very reasonable and the sites are spacious.

For us, it is also very handy as there is a Super Wal-Mart only two miles away, our new doctors are just three miles away and our youngest grandchildren are just about eight miles distant! We had a great summer here even though we were here much longer than origionally planned. The staff here were very accomodating and helpful. One could not have asked for any more. 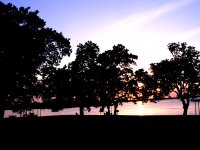 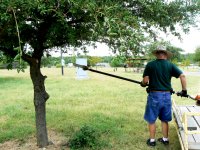 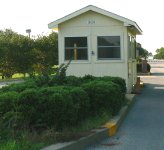 While at Lavon Lake Kirk trimmed trees in the park, operated a tractor, mowed lawns with a riding mower, and assorted maintenance activities. Pam helped around the park, did litter walks and worked in the lake toffice one day each week. The staff at this lake are a wonderful group and we had a truly great summer. 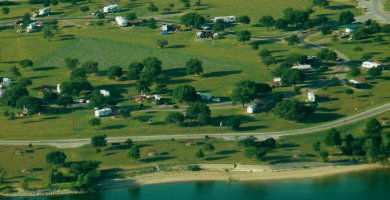 The sites at this park are mostly level, have both 30A & 50A power and water. The volunteer site also has sewer connection and the park has a dump station. In addition there are three other parks with RV sites. 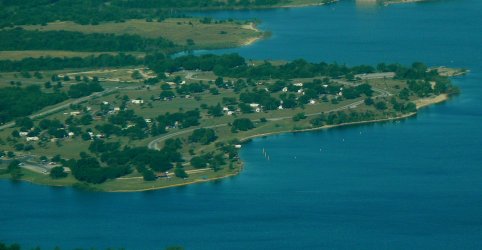 With this park so handy to our family and our doctors, and the lake staff so very great to work with, we expect to return for at least short visits many times in the future. It has become our new home base!If you would like a place to spend a few months in north Texas, Lavon Lake is a great place to stop.