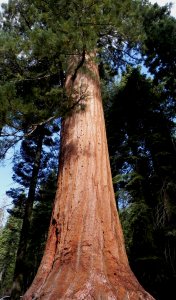 As we traveled south from Oregon to southern California we chose to spend some time in Yosemite National Park. While not the largest of our national parks, it has some spectacular scenery that is comparable to that of Yellowstone or Glacier. Most years the dry summer causes the water features to fall to a mere trickle, but we were fortunate in our late summer visit, that this year the park experienced a far above normal snowpack and so the streams were still at relatively high flow levels. This made the many waterfalls much more impressive.

We entered the park via the south entrance. Just inside is the road to 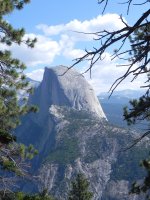 Mariposa Grove, an impressive stand of old growth sequoia trees. It was striking to compare those to the redwoods of the northern California coast which we had seen just days before. Here are the two largest species of North American tree, a relatively short distance apart, but in very different climates.

From there we traveled north to Glacier Point road and over that to both Glacier and Washburn Points. Although the two are not far apart they give very different views of the Yosemite Valley, more than 3000 feet below. The trails to the viewpoints are paved and easily walked and Glacier Point also has all visitor services. Along this road are some spectacular views of the bare, rock mountains of Yosemite that are so popular in photographs and 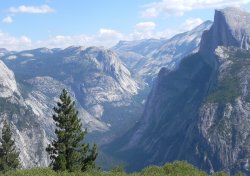 many also with rock climbers. As you travel the road it seems that one approaches sensory overload! Allow plenty of time as you travel, for stops to look and take pictures. Each turn brings a new scene and seems to be more beautiful than the last one.

Our next top was at Bridalveil Falls. After a quick picnic lunch, 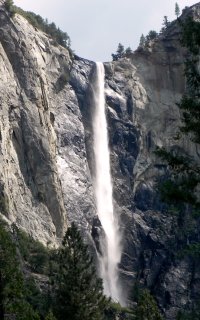 we both made the walk up to the base of the falls. This trail too is paved and easy walking, but a little steep in places. Pam was able to make the trip, but with her ankle brace it made for some difficulty. Even so, she felt that it had been worth the effort. In addition, Pam had not been to the park since she was a small girl and this was my first trip. It does not take long in the park to realize that this is one of those places that every American should see if at all possible. 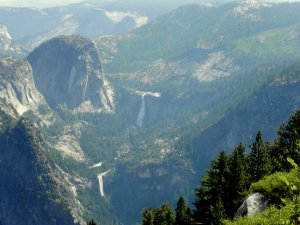 For those of us who enjoy taking of photographs, the opportunities are everywhere. If you use a camera with film, be sure that you bring extra and if digital, a large volume of storage is important. The photo opportunities are so numerous that they seen unending.

One thing that we found fascinating is the large 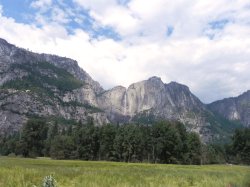 volume of traffic that was in the park, even with our visit well

after Labor Day and with schools back in session. If you have the time, nearly all of the park can be seen from free trams that tour the park and which stop at all points of interest. Even with the late time we were here, there were times when parking was difficult to find when visiting the major attractions. If you are retires, as we are, it is wise to time your visit for a time when most schools are in session because of the large visitor volume. In addition, even when we visited, it would have been impossible to have gotten a spot in any of the campgrounds without reservations. If you happen to be a member of Escapees RV Club, the best bet is to put the RV at Park Sierra in Coarsegold and drive in from there. If you wish to stay inside of the park, early reservations are very important, especially if you vist in mid summer. Campsites that have hook-ups for RVs are very limited. 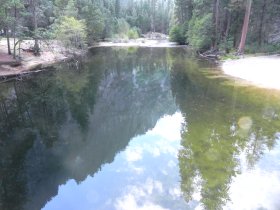