On June 12, 2007 at about 3am central time, the 3-3-5 Military Transition Team arrived back at Ft. Hood after one year of service in Iraq in support of an Iraqi Army infantry battalion.

The teams were made up mostly for an Army Reserve group but with about 30% soldiers from the Regular Army, mostly career soldiers. As with all things military, the first activity, once the soldiers had checked in weapons at the armory, was an assembly. As with most things Reserve, that assembly was full of false starts and disorganization, but it did at last happen! 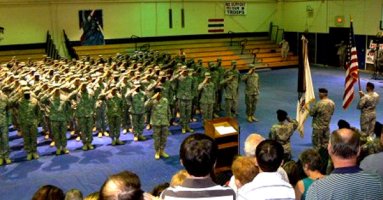 Also like many military events this was drug on and on while senior officers each got a chance to speak and to give recognition to the members of the Reserve, while the soldiers of the Regular Army had to stand in formation, totally ignored. The Reserve general hardly gave notice to the service of those who were real soldiers. In fact, they were so unconcerned about the Regulars that none of their families were ever given any support from the unit command and we even had great difficulty in getting any information about when or where the troops would return! It was discovered that not one member of the Active Army were even on the support list. It was with the help of the staff at Senator Kay Bailey-Hutchinson's office that we were even able to make contact with the proper people. And when we did make contact, it was discovered that no active duty soldier's name was even on the list of returning troops that the command office was using. To determine what flight Ken would be on, I had to give the Captain in public relations the names of some of the Reservists that I knew were part of his team. As happy as we were that our son was returning from Iraq, I remain very angry about the shabby way that all of them were treated. Notice also, among all of the neat gifts for Reservists only is a burial flag for each soldier of the unit? Strange gift for a returning combat veteran. 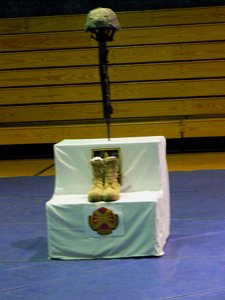 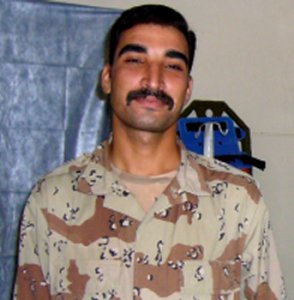 As is proper at any military return ceremony, just after the playing of the national anthem, recognition was given to those who were lost in action in the year of deployment. Fortunately, for this group there were no members of the teams lost but there were some support personnel. There were some injuries due to hostile actions, among them was one member of Team Buffalo, SFC Rodriguez. Fortunately, "Rod" has now recovered from his wounds. He was returned to the states for recuperation prior to the unit's return and was not present for the ceremony. 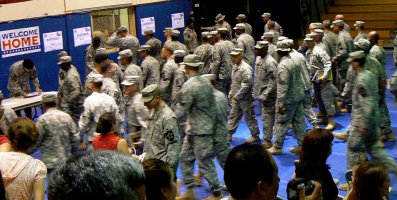 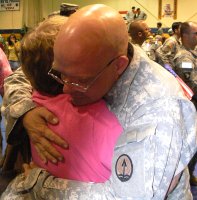 At long last the "dismissed" command is given and troops can greet families and start the process of leaving to return home. Since the soldiers came from other parts of the country to join the teams, only a few families were there to greet them. We were fortunate to be able to stay in Texas to greet our soldier but his wife and children were waiting at Ft. Knox for his arrival there. Nearly two more days passed before Ken got to join them again. 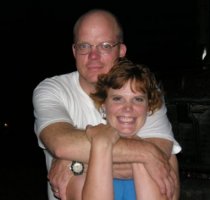 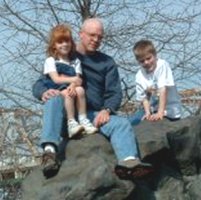 Will this be the next soldier that our family waits nervously for his return? 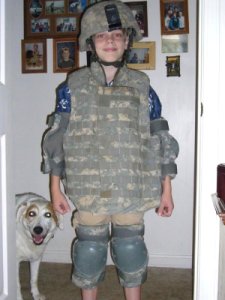 Our family's next soldier?

One final footnote. After returning to his command at Ft. Knox our son was awarded the Combat Medic Badge for caring for wounded soldiers, risking his own safety while under enemy fire.