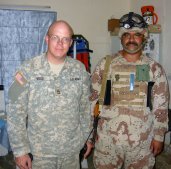 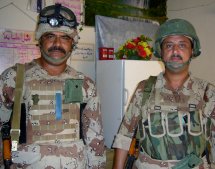 The latest update from Iraq is about the duties of the medical team and the mission that they do. In the first picture, Ken is posed with the platoon sergeant in the battalion aid station where they care for the troops.

"A funny thing about the Iraqi’s they like having their pictures taken. They will then ask you for copies of the pictures, though. I guess cameras and photo developing are very expensive here so not a lot of people have cameras."

In the second picture you can see that their aid station is kept very clean and in good order. But you might also notice that there is no bed, just two stretchers there. The sergeant asked Ken to get them a bed and Ken suggested he go through the Iraqi supply system.

"The bed request died after I suggested he order through his chain of command."

"Most Iraqi's don't want to expend any effort in solving any issues. They want someone else to do it for them. A good example is the platoon sergeant for the medics told me awhile back that he wanted a bed to put in the aid station. I replied, okay, have you asked for a bed from his unit? No, of course not, that would have required effort and possibly rejection on his part. Much simpler just to have me do it." 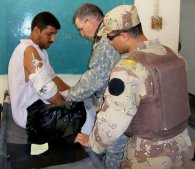 "We also participated in a MEDCAP (don’t know what it stands for but it’s when you go treat civilians. It was a joint mission with both the Iraqi Army medics and the Americans."

In the first picture you can see the typical equipment worn by all American troops. This happens to be the mission commander, but all soldiers wear pretty much the same type of gear. The pouches are ammunition. Even the medical staff today go into the field armed. Also you can see the body armor that is worn by all American soldiers. These pictures also show that the Iraqi troops are not nearly as well equipped. In the third picture an American doctor is treating a civilian with a broken arm, assisted by the Iraqi medical officer. The Iraqi battalion has no doctor but two medical officers who are both nurses. The one in this picture is Lt. Walid. In the last picture a burn victim is treated by two Iraqi medics. The shot here is another of the doctor and the Iraqi medical officer. Any visitors who are familiar with middle eastern geography will have heard of the Tigris River, which is the on it the two river shots. It seems a little surprising to see one that large in the desert. Ken doesn't know, but believes the bridge to have been built by the Americans. He did say that there was no sign of rubble to indicate that there was ever one there before this one.

The last picture is of an Iraqi cemetery. This one is typical of what you see in this part of Iraq. All seem to be some type of above ground crypt and he has seen no sign of any decoration of the graves, as you would see here. The people in the cemetery seem to just be passing by.