Here are some pictures that I took while visiting a colony of elephant seals near Pt. Blanco, just a few miles north of San Simeon, Ca. The elephant seal is the most unique member of the pedipod family. Other members are the Sea Lion, the Harbor Seal and the Walrus.

Elephant seals are migratory animals and while they congregate in large groups for short periods, they spend months at sea, traveling alone. The life cycle begins with the birth process, which is probably the most interesting part. It starts with the return to the beach of the adult males. They have been far at sea for months, diving to depths as great as 5000 feet to find food and returning to the surface to breath. During the time at sea the adult elephant seal does not return to land at all. 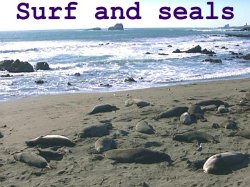 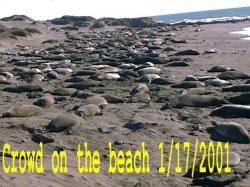 The return begins with the arrival of the smaller males in late November, and the other males follow, with each wave of arrivals larger than the one before until the largest males, weighing as much as 5000 pounds, come ashore. As the larger males arrive, they chase the smaller males to less desirable parts of the beach. 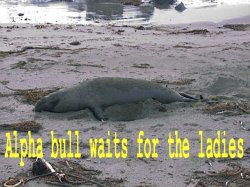 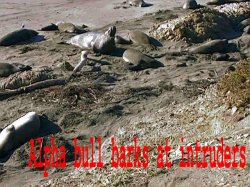 In mid December the pregnant females, weighing between 2000 and 3000 pounds begin arriving. They move into the area of one of the larger males, called alpha males, for protection. In so doing they become a part of his harem in return for his protection. As the number of mothers to be grows, a number of the larger males, not yet large enough to be an alpha, but larger than most, join the edge of the group. They help the alpha to defend his territory from the smaller intruders, in return for his tolerance of their presence. Scientists believe that this alliance is to allow the beta males to get a chance to breed when the opportunity arises and the alpha is busy with other members of the harem who are fertile. This is a very precarious alliance with periodic fighting. If a larger alpha should arrive on the scene, or a more aggressive one, the alphas will at time stage very bloody fights, although we didn't see any. 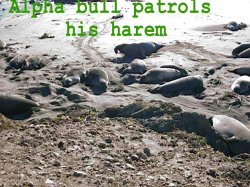 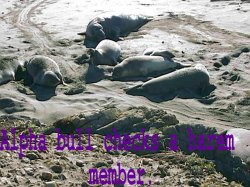 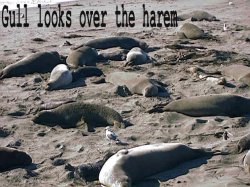 The female stays to nurse her pup for about one month. During this time neither the males nor the females ever enter the water. The pups weigh from 60 to 100 pounds at birth and they gain an average of 12 pounds per day during the one month that they are nursed, usually weighing between 300 and 500 pounds when the mother leaves to return to sea, alone. Just prior to leaving she will accept the attentions of a male, usually the alpha. The fetus lies dormant for the first two months while the now slender female regains her strength and weight. She will have lost 40% to 50% of her weight. The milk she produces is the highest butterfat content milk known to man. 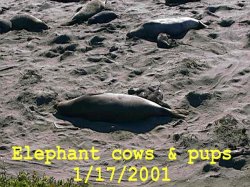 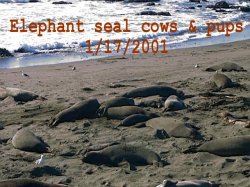 When the female leaves, she leaves a practically helpless pup on the beach. At this point, the pup does not know how to swim or to eat. It will survive off of the fat it gained in the first month of life for a month or more while it learns to swim and discovers how to eat and hunt. The pups pretty much stay on the beach, making short trips to sea to eat for their first year of life. At some point they begin to venture farther to sea and for longer periods, eventually joining the cycle of adulthood.
The males stay on the beach, fasting, fighting, and breeding for about three months, until early March when all of the female adults have gone. By that time they have lost 50% to 60% of the weight that they arrived with. They now head back to sea to feed until it is time to return to shore to molt in August. At that time elephant seals return to the beach of their birth, as they do to mate. 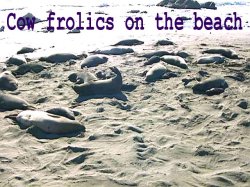 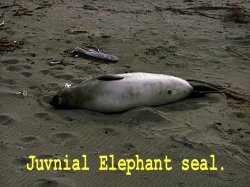 Females live an average of 20 years and the males about 15 years. It is believed that the difference comes mostly from the fact that the males go out farther and deeper, and thus take greater risks. They also have a much wider weight swing, also thought to be a factor.