On Feb. 1, 2010 we arrived out our new home for three months. The greeting here was one to remember. I don't believe that we have ever had quite such a grand reception and appreciation for our long history as volunteers. We have now traveled on but the experience will be long remembered.

The park is a day use park for now, but is developing some campsites and expects to open to camping very soon, if the weather will just cooperate!  As you arrive at the park the first thing seen is the entry gate of rock. This is a very new park, having only been open to the public for four years and the primary

purpose is actually the preservation of the recharge zone of the Edwards Aquifer, which supply's most of the water for San Antoni and surrounding area. It is also a critical habitat to much of the wildlife in this part of Texas.

The area seen by automobile is mostly covered by a mix of juniper and mesquite brush on the hillsides with assorted natural vegetation  in all directions.Most of the land has never been cleared but due to overgrazing when a private ranch, it has been taken over by woody plants and small trees. Some of the timber has always been in the area, but it has spread with over use to where only tilled areas remained free of brush. The next sight to the arriving visitor is the booth where entry fees are collected. The booth is maned four days each week, when the park is open to visitors. As a new

park, not yet fully developed, it is only open at present from Friday through Mondays. The gate is opened at 8am and closes at 10pm. The cost to visit is $6/person, with children under 12 free and seniors at half price. Part of our work here was to man the fee booth one day each week, however it only required both of us at the most busy times.

The park has more than 40 miles of trails, open to hiking and mountain biking and in time some will also be opened to horsemen.  Trails in what is called the "front country" are also open for dogs when kept on a leash. In the back country, which is the larger area and the more rocky part where the water actually enters into the aquifer, dogs are not allowed. It is an excellent area for birders, and one of them is the endangered golden-cheeked warbler.

The area is also home to coyotes, cougars, raccoons, ring-tailed cats, white-tail deer, and numerous other species of native game, along with the unwanted ferrel hogs. It is quite common for visitors to spot wildlife on the trails through the undeveloped areas of the park.  Since the park encompases 11,000 acres and no more than fifty of that are developed beyond the trails into it, there is ample area for wildlife to thrive here and all but the hogs are protected.

A short drive past the entry booth and you arrive in a large parking area and the visitor center complex. The visitor center is comprised of a display area, a small gift shop and a group area. In addition the area has picnic facilities that are fairly private as well as the trail

heads into the many hiking and biking areas. Not far from there is also the soon to be, camping area.  There are public restrooms and at times interpretive programs here.

the days when this was cattle country. The deputy park manager lives in a house in that area and there are also four RV sites with full hook-ups, complete with 50A electric connections. The park also supplies the volunteers with propane and each couple are assigned the use of a park truck for all work hours. At present there are three couples here and all are quickly becoming good friends. In return for this each couple is asked for a total of at least 25 hours per week, split between the two. Most of us do put in extra time which is pretty typical for most bolunteers.

One day each week Kirk worked in maintenance while Pam worked in the visitor center and he also did mowing and such when not needed in the fee booth. Kirk also spent time walking the trials to do interpretation work and one day each week we both helped wherever needed as well as closing the park at night

and checking and cleaning as needed the trail head restrooms. The staff were great to work with as were our fellow volunteers.

We also had a great team of volunteers while we were there with frequent social gatherings in the evenings and more than one trip off site to visit local attactions. The park has a very remote feel to it, even though it is only minutes from San Antonio and major shopping as well as all of the attractions any large city offers. If you like quiet countrysides with easy access to the things found in the city, Government Canyon is the place to find both! 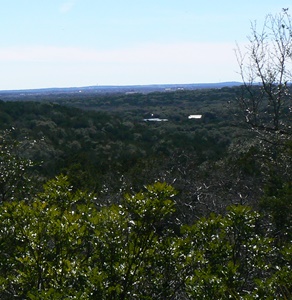