After the disastor that Wolf Creek turned out to be, we returned to Ft. Knox campground to make new plans and consider what to do with the 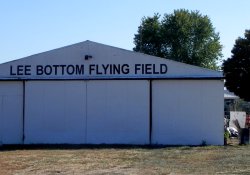 coming months. We called Rich & Ginger at Lee Bottom, and as it happened they were in need of help for the coming Wood, Fabric, and Tailwheels fly-in.  Since we had often spoken of returning for the week, this seemed to be a great opportunity to spend some time doing things that we really enjoy and at a place were volunteers are highly appreciated. We arrived at Lee Bottom, just one week before the planes were due to start arriving.

The RV site is the same as we used when last here and it is a very exciting location for those of us who enjoy airplanes. We parked and set up, then got very busy helping to prepare for the biggest event of the year here. When we were last here the fly-in was attended by just under 200 airplanes

but this time it was nearly 400 airplanes and an additional two or three hundred who drove to the field. There were even 28 RVs that dry camped in the field across the road.

One of the more interesting parts of this event for RV folks was the number of pilots who would fly in for a day of work in helping set things up for the big event for several days before the start. On Tuesday we had three airplanes here just to help, carrying a total of four volunteers. Wednesday and Thursday both brought several more 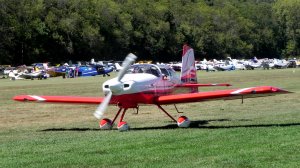 planes just for the day with setting things up to be ready for fly-in. By noon on

Friday there were more than 20 airplanes here bringing in staff volunteers and by the official start at 4pm there were nearly 50 airplanes present.  Pilots are also campers and by evening there were a total of 88 airplanes on the ground with most having a tent pitched under the wing to house the pilot.

Pam helped with getting all of the administrative work done before and during the event, with setting up the store area and working with the caterors for the meals. I was busy doing the last of the mowing, setting up tents, helping to mark out aircraft

parking areas and taxi ways and laying out the areas for air-camping. This type of air travel has become popular enough that there is now a group called American Air Campers Association, and they had representitives at the fly-in. We were quite surprised by the popularity of this type of camping. Backpacker equipment was very much in evidence for use in the small airplanes.

Our site here has a wonderful view to the river as well as of the air field. We look out to the east on the Ohio River where barges and boats of all kinds pass by frequently. In addition to that, the hillsides

around us are alive with color as the leaves change color with the coming of fall. There are also deer in the area as well as numerous birds and assorted other wildlife. We also see the early signs that winter is coming and so we will soon follow the birds and start to travel to the south.

Much of what we do here is preperation for the coming winter as equipment is serviced and much of it is stored away for use next year. Activity here at the airfield is also tapering off with fewer visitors and only occasional busy weekends. I have been doing some electrical work for the buildings on the field as well as repairs on some of the plumbing. I have nearly completed a project to put the electrical supply to the cabin underground as part of the effort to remove as much of the visable utilities to get them out of view. 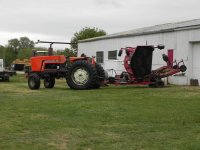