This story begins with SFC Wood reporting for pre-deployment training at Ft. Hood, Texas on May 1, 2006. From here on, what is in bold print is quoted from the notes that I have received from Ken in Iraq. (bold print items are quotes from Ken)

Having visited Ft. Hood, I'm not sure that I would name it "The Great Place," but that is what the command has declared it to be. Ken was assigned duty with a transition team. Transition teams are the people most involved with the "exit strategy" from Iraq, that our press and some politicos love to tell everyone does not exist. There is at present a major effort to improve the Iraq Army and to turn over more responsibility to them.. 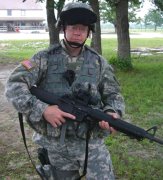 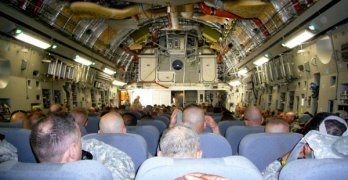 Six weeks were spent at Ft. Hood in organizing into teams and becoming combat ready, if you ever can be. The following is a direct quote from an email sent from Ft. Hood, before departure for the middle east.

"The biggest shock as far as training was while at Fort Hood - the amount of time off. I do believe at least 1 week could have been cut out. A lot of the training has focused on some of the newer communications systems and other systems designed to keep Soldiers alive. The amount of equipment fielded designed specifically to counter IED (the #1 threat to Soldiers) is staggering. It's actually where a lot of the complaints since this war started have come from. But people don't seem to understand the government can't snap it's fingers and make things appear, they still have to be manufactured by somebody. The support of the troops when it comes to quality of life is also staggering. Of course, Soldiers still bitch, but they always have and always will continue to do so."
Next, destination Kuwait! They arrived on May 20 at 2am and the temperature was 113 degrees. This is an important date because it is the day that the count begins for the 1 year of deployment "in theater." 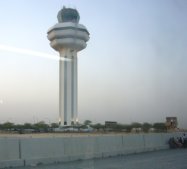 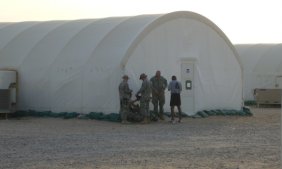 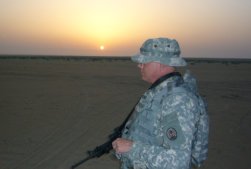 "95% of the training is the same for everyone. ....... The overall command and structure of this group came from a reserve training division - with a mission of conducting army training (basic, MOS, etc). ....... "

"I should know more about the Iraqi living conditions once I actually start doing my job. But one thing I can tell you is satellite dishes and cell phones (both not allowed under Saddam) are everywhere."
July 1, one more stop in Iraq for final training before beginning the actual work that these soldiers were ordered here to do.

This is Taji, Iraq the former home of Saddam's Republican Guard. It is the most luxurious of any Iraq Army facility and far beyond what most local citizens ever have access to. Notice the "modern" toilet. The user just squats over the opening and does their thing. It is all ceramic tile and thus easy to keep clean. Notice also that there is no toilet paper holder! That is because the plumbing will not deal with paper. But if you look to your left on the wall you can see a nice chromed faucet. It is there so that once you have completed what you came for, the final task is done with your left hand, which you then use the faucet to wash. No paper is needed with such a toilet.

"We will be advising the 3rd Battalion, 3rd Brigade, 5th Iraqi Infantry Division. "

"To answer about living conditions, it's hard to categorize. The US troops live in everything from very nice to bad. Of course it's also been my experience that those that bitch the loudest are also those that have it the nicest. Go figure. When you are at the bottom, any improvement is a good thing, and you don't complain." 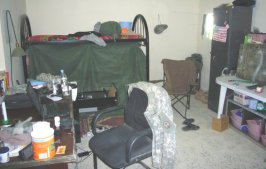 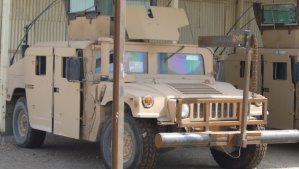 On July 11, 2006 the team arrives at there assignment and begin their mission, supporting and training an Iraqi Infantry Battalion.