What Smells Bad in Here?

Are you noticing what smells like sewer gas odors in your RV? Does it seem like things are venting up into your RV, rather than to exit out the vent on the roof? Most people think first of the toilet and the associated tank below. In reality there is a much more common source of these odors. You might be surprised by just how bad the odors from the gray water tank can be. The smell that comes from the collection of soap, kitchen detergent, bits of food, and cooking oils that collect in the gray tank can be even stronger than what comes from the black tank and is far more common than odors from the black tank. RVers often overlook this item when dealing with this problem. 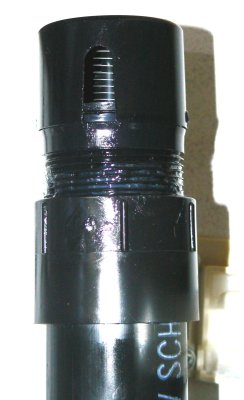 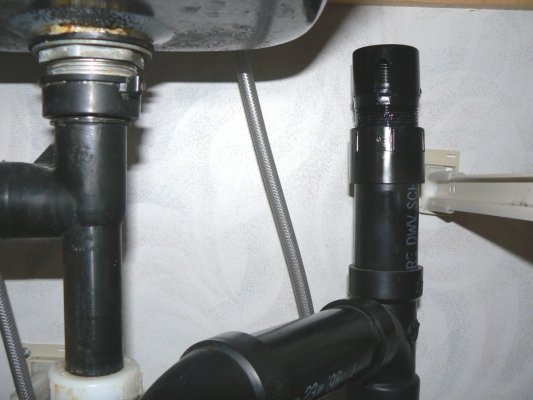 If you look into the vanity of your bathroom, up toward the bottom of the sink you can find the item of concern. You will see the drain line where it exits the sink. Trace that down and it will connect to the P-trap and from there it connects to a horizontal line which terminates in a tee. The upper leg of the tee is terminated with the vacuum breaker at the top and the other goes downward to drain into the gray water tank, at some point. If you look to the upper right of the picture above, you can clearly see the device we are concerned with. On the left is a close-up of that same device and if you click on the pictures you will get a much larger version of each.

The device is there to allow air to enter the line behind draining water to thus prevent pulling the water from the trap, or a lock forming to cause the sink to drain slowly. If you look closely at the picture on the left, you can see the vent opening where air is allowed to enter into the drain line. In this case you can also see the small spring which pulls a diaphragm up to close the opening and prevent sewer gas from entering the RV. When the sink drains, the vacuum that the water creates will pull that diaphragm downward, allowing air to enter the line. When no water is passing through the drain, that spring pulls the diaphragm up against the seat and stops any flow of sewer gas or air from the gray tank back into the RV. There are two common types of this device but both perform the same function and both work similarly.

Over time, the diaphragm can become deformed to a point where it does not seal properly. If it should stay open, wind blowing over the top of the RV can cause a slight pressure inside of the gray water tank and so air will pass through the tank and into the RV. The same problem can be caused by the use of a vent fan blowing out of the RV and so causing a small lowering of air pressure inside of the RV and so bringing the same result of odors inside of the RV. Replacement of these devices is a very easy thing to do.

Notice that just below the cap portion, you can clearly see the threads on the end of the pipe. The vent cap is screwed on to this threaded fitting and should be only hand tight. Just keep in mind the proper direction that it must be turned as you will be below the cap and so it will seem to turn backward. Once you have it removed, take it with you and visit the nearest Home Depot, Lowe's or other home supply or plumbing shop. A replacement should be very easy to find and the cost should be less than $5. Let me suggest that when you go, buy two of them since you will have another located under the kitchen sink and I always replace both since when one fails the other probably isn't far behind. What you should ask for is a mechanical plumbing vent. 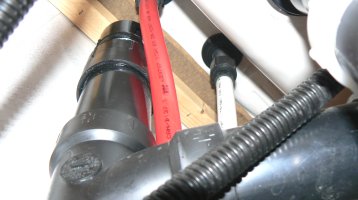 You can easily see the second one if you use a flashlight and look carefully. It will be after the P-trap and positioned just like the one in the bathroom. When you go to replace these devices, put a light coating of Vaseline or similar product on the threads before you install the new one. This will make the seal better and it will make it easier to remove in the future should you need to replace it again. I prefer to use the type that have the visible spring, rather than those which just use the flexing of the rubber diaphragm to return to the seat, but either type work and it isn't worth a great deal of extra effort.

I believe that if you do this maintenance the next time that you notice an odor in your bathroom, or in the cabinet under the kitchen sink, you will probably be pleasantly surprised by how easy and effective it is.