On August 3, 2009 we finally arrived at Swan Lake National Wildlife Refuge. We had expected to be here from June through August, but due to Pam's ankle surgery that was impossible. This was the first volunteer commitment that we have missed in our ten years on the road. 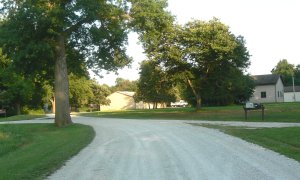 This refuge is located about 100 miles to the northeast of Kansas City, Mo. and just 10 miles to the south of highway US36. It is an area of rolling farm lands and timbered streams. It consists of about 10,000 acres of which more than 3000 is in two lakes. Swan Lake is next to the road into the refuge and is low most of the time to attract wading birds. Silver lake is much larger and is quite popular with local fishermen. Boats are allowed on Silver Lake, but it is a "no wake" zone. This refuge was created by the Civilian Conservation Corps, back in the early 1930's and the purpose is primarily migratory birds. The CCC camp was closed in early 1942.

The refuge is presently staffed by a manager, five permanent employees, several seasonal employees and they have two RV sites for summer volunteer positions. The volunteer program 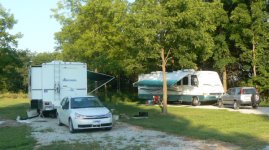 The RV sites are complete hook-up with 30/50A power, reasonable 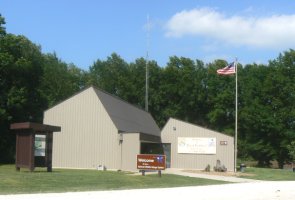 shade and large concrete pads which accommodate the largest of   RVs and wide enough to allow for a patio as well. There are two sites, designed to face each other across the lawn. Each site has 30/50A power, water and sewer. The pads are 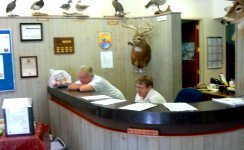 concrete and generous enough to allow space for parking the RV and still have room to walk around it or to sit on the patio.

The only complaint that I am aware of here is that the visitor traffic is pretty slow and so it can be a bit boring at the visitor center at times. There have not been a lot of other jobs given to the volunteers as yet, but they are expanding what we do as they develop the volunteer program here.

The refuge is a beautiful place with much of the land leased to farming operations, growing beans and corn. The lease requires that the farmer must leave 30% of the crop standing in the fields for winter feed for the wildlife.  There are many resident deer, 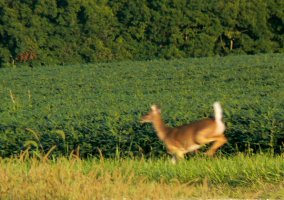 raccoons, rabbits, song birds, egrets, great blue herons and white pelicans, as well as assorted other wildlife. Deer are frequently seen near the RVs and around the buildings and lawns. Raccoons are frequently seen in daylight, which is quite unusual.

One of the visitor programs which volunteers assist with is called First Friday. The first Friday of each month the staff and the "Friends of Swan Lake" put on a program for the local community in the evening. 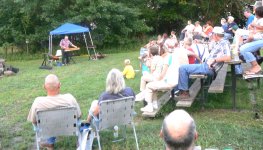 activities and displays related to the refuge, hay rides by horse drawn wagon and the program always ends with an hour or two of entertainment by some type of performers from the area. This refuge is quickly becoming a very popular place with the neighbors, as a result of the efforts of the manager who has been here only two years. 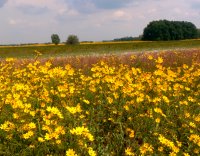 The nature walks around the refuge are especially pretty in late summer. 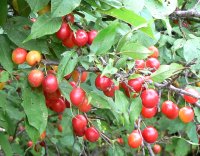 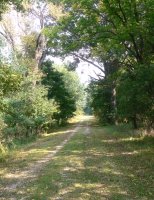