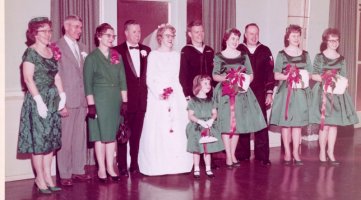 One a sunny day in Redlands, CA, on Dec. 22, 1962 our new life began. The day was 72º at 2pm in the University Methodist Church. Hard to believe that it waas that long ago............
As an anniversary gift I got Pam a new air compressor! She was so thrilled that she responded by getting me a gift also. It was a brand new vacuum cleaner!

Well, it has now been a year since we were last out doing the RV thing but at long last we got it done! Our new RV is no longer a virgin but has been slept in. We towed it to our friends in Granbury, TX for a few days visit and while the medical world has kept us pretty much off of the road, the ice has been broken once more! Were we excited, you betcha!

We did kind of ease into this with our trailer under the shelter of our friends the Davis's just behind their fifth wheel. With this one having spent all summer inside of our RV shelter we thought that we perhaps should not shock it by  going at this too rapidly! Over all the trip went well and we are satisfied with our combination. We got about 12mpg, which is a 50% improvement from the motorhome, although not quite as good as we might have hoped. We are no anxious for spring to arrive so that we can be off with it once more!

Well, your lazy host has gotten some work done once more. I just put up a new page if you are interested, that tells the story of my birthday balloon ride. My next project is going to be to pu one up for Pam's skydive last year. You can see the new page by using this link.

In September, I reached the age of 70 and just as they did for Pam last year, our sons presented me with a gift

that was memorable. I have long been one who enjoys flying in light aircraft but this time they really boosted that experience with a gift certificate for a hot air balloon flight, Not one of those teathered deals but the real deal from begining to end. It all began with a ride to the field 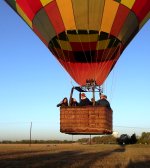 where we were to launch. Passengers were allowed to assist with the unloading and preparing of the balloon, which is initially inflated with a pair of fans, then after pictures were taken the propane burner was lighted to heat the air and get things going. It takes about half an hour to get things ready to fly and load everyone into the basket.

For all of this, Pam came along and followed with the chase driver and got pictures 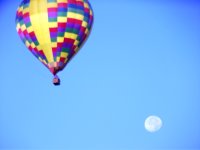 from the ground. The day was just beautiful and weather could not have been much better. We were airborne for just over an hour and it was one amazing experience! The pilot was an amazing fellow and gives passengers an outstanding experience. By changing altitudes the pilot was able to some degree to steer our dirction of travel. We varied all of the way from just above the ground up to nearly 3000 feet. We were in restricted air space and so could not go above that level, but that also means that we had great views of everything that we passed over and got lots of great pictures. It was definately a birthday gift that will be long remembered! I would highly reccomend that anyone who has ever considered this type of flight do it! In addition, should you do so in the area of Dallas, TX, check out the experiences provided by Rohr Balloon Flights. 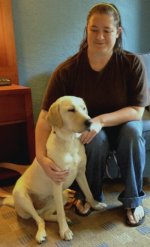 they return from school and such as their mom is presently in California to get her new guide dog. Mom is completely blind and so uses a dog to get around and retirement time has come for her last one. The dogs complete the last part of their training with the person who they are to spend their life guiding and so users must spend time at the training center with the dog before taking it home.  Jenny & Marmalade will be returning to Sachse, TX on Sunday and grandma & grandpa will return home! This has helped to remind us of the reason that young children usually also have young parents!

We are hoping to get out with our new RV in another week or two. The poor thing is feeling abandoned! We have sat home now for longer than we ever did even before we retired this time. We hve not been out by RV since we got back from our last summer in October of 2011.  That is too long!

I do miss our roving life but with all of the medical malidies that Pam has experienced over the past several months, it has been a good thing that we have a home base once more. But I do miss those days and hope that she will be well enough for us to leave for a month or longer very soon.

We are slowly getting the new RV ready for her maiden voyage. It has now been road tested to complete the setup of the Prodigy brake controller and most interior changes and additions are now complete. Just a few more things to do and we hope to find a way to schedule at least a few days of test run. The old itchy feet syndrome has really flare up!  It has been quite a summer and Pam has clearly been where she needed to be as we seem to have spent most of it visiting doctors.

We thought that we had pretty well finished with all of them in east Texas, when she suffered another attack of bronchitis and so is now back on medications for that once more. It does seem that we made the right choice in finding a home-base and staying put this summer.

It seems that the summer doldrums have been active at our house of late. It has been a pretty typical east Texas summer with high temperatures mostly in the high 90’s with sometimes several days into the low 100’s. As such, not a lot has been done on the RV, but things have started to change!

Yesterday I got two new pages up on the RV Lifestyle site, relating to weight limit definitions and also to weighing and balancing the RV. I had worked on that project on and off for quite some time.

Today was a big event as we took the trailer out and towed it for about 20 miles as a test, for the very first time! I had installed a brake controller but needed to tow in order to actually complete the set-up. All went well, other than the fact that I forgot to take a picture of our first time towing the trailer! 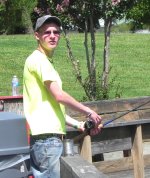 I have been a little remiss in posting to the blog for the past month, but will try and make up a bit. After we returned from Washington, we got adjusted to home and then went to Dallas and picked up our grandson when he flew here for a 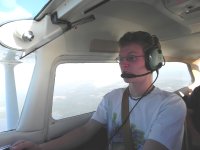 three week visit. Justin arrived here on July4 and returned home on July 31. We had a great time with him, visiting museums, fishing, running about in our golf cart, and many other things. We took him for a day at Six Flags Over Texas and a day at a water park, and I even arranged to get him our flying with my good friend and former coworker, Jim. Justin was thrilled by the experience and particularly with actually getting to fly the plane for a few minutes. All in all, it was a great visit and our weather eveen cooperated with him as we only had three days of 100° in the entire time that he was here. He thought that it was awfully hot, but we assured him that it could be worse!