Here are some of the latest pictures that Ken has sent from his station in Iraq. All bold print is quoted from Ken's email.

Tower 10 - This is a photo out of one of the Iraqi guard towers (#10) about 150 meters from our team house. You can't really tell in that picture, but you are about 30 feet off the ground.

Along the Wall - Also taken from that guard tower, just looking along the wall of the base in either direction.

Dali Abas - This is a photo of the Iraqi Army compound in Dali Abas. The Battalion has one company stationed there and it's about 30 minutes from the base. The armored vehicle you see is a former American vehicle (repaired after scavenged from the bone yard) that the Iraqis used on missions. It was hit by an IED and had the left front drive sprocket and road wheel blown off. A funny thing about those vehicles, the Iraqis feel safer from IED blasts in them, but because of advancements in metallurgy (they where made in the 60's) the thinner armor of the HMMV is actually better. but they make them feel safer and sometimes that's what matters. 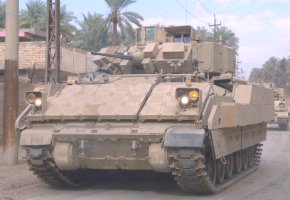 - This picture of a Bradley Fighting Vehicle was taken during the most recent large mission. The current unit here, 6-9 Cavalry, 1st
Cavalry Division, is using the Bradleys far more than the previous two units, I'm unsure why, other than they are much safer in an IED blast.

Iraqis on mission - nothing special, just some of the Iraqi Army during that mission.

A very dangerous place to be!

The last of the pictures are in sequence and show bit of the threat and what EOD does here. On that mission we located about 10-15 IEDs and several caches. The majority of the IEDs where driven past by some, or the majority of the vehicles, but for whatever reason were not detonated by "the bad guys" One of them, that was found as troops started searching the buildings around our immediate area was about 60 meters behind where I was parked, so I ended up with front row seats of what happens next. Well, front row, looking through bulletproof glass and through a rear view mirror. 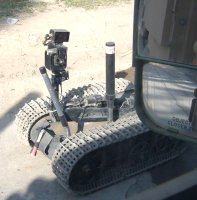 Robot and robot up close are pictures of one of the robots EOD uses to examine explosives from a safe distance and carry charges down to blow them up.

Driving the robot - this is the EOD tech (Air Force, that's why the different uniform, but there's also both Marine and Army EOD) driving the robot by remote control. MAJ D, one of the team, is watching over his shoulder. (click on the picture to see the Major)

The rest of the photos where taken through the side mirror or out the turret by the gunner.

Going to look 1 and 2(click on picture to see 2) and looking are the robot on it's way down to take a look at the IED and to place the charge to blow it up. In the first two, the yellow can you see is sitting right beside it. The can was placed there by the troops that found it as an easy way of identifying where it was. In Going to look you can see a green wire on the ground on the side of the mirror. That's the wire connecting the explosive charge to the detonator used to blow it up. 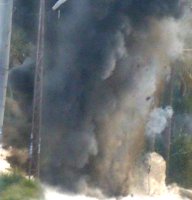 BOOM - 1 pound of C-4 plastic explosive and a 155 mm artillery shell make quite an explosion.

After blowing up the round, EOD drove the robot down to look again and verify that the round was destroyed. Well two things happened, first, there was another 155 mm round in the hole. The first charge on blew the top round, and the IED was composed of two rounds. Second, the driver got too close to the hole and the robot toppled over into the hole, with the IED in it. Well, EOD had to drive down and rescue their robot and that's what the last pictures are of. Remember, there is still a live 155 mm artillery round in that hole, under the robot. After rescuing the robot, they place another pound of C-4 on it, with a timed fuse.

So now you know what the #1 threat to our troops is while serving in Iraq. And the guy who helped out the robot? Now there is a man with guts! Unfortunately, I do not know his name to give him credit for what he does.

And this was the result of an Iraqi armored Land Rover that hit an IED.

The driver was killed and one other occupant died 2 days later. He was made worse (head injury) because of the Iraqi attitude about wearing helmets. He probably didn't have it one (or the chin strap snapped anyway). There was another casualty that didn't either. The other 4 people in the vehicle where sent to the American Combat Support Hospital. 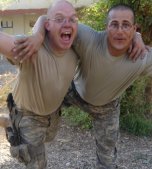 In the first picture Ken is treating an Iraqi soldier who has been injured, and instructing the Iraqi medical personnel. In the next we see two of the members of Team Buffalo in a period of just "goofing off" while on base in a secure area. The last picture shows that even our troops need a break for Christmas.