We began our visit to Quebec with a stop just across the St. Lawrence River from Quebec City. There is a beautiful park located just east of the bridge to the city. 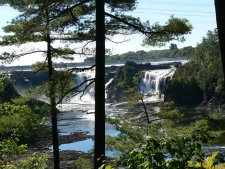 Casudiere Falls Park is near the main highway into Quebec City and houses a visitor center as well as many hiking paths. Since we arrived after the first of September, the information center was closed, but we enjoyed the park and spend several hours there. As you approach the city from the east, you first see a very long bridge as the St. Lawrence is a navigable river and this is the main ship channel. The city is on an island in the river and must be reached by bridges. This city is the second European settlement in the "New World" and was founded by the French under Champlain, just two years after the English colony was established at James Town, Virginia. What surprised us most was the fact that the old city was enclosed in stone walls. 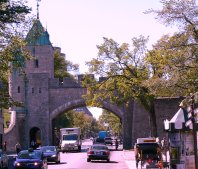 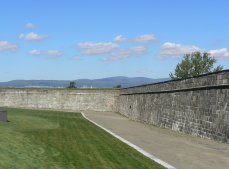 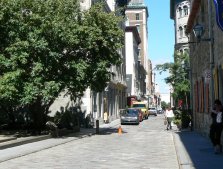 Quebec City today extends well outside of the old city walls, but the most interesting part is inside of those walls. While outside the walls is a very large and modern city, the old city has maintained most of it's charm of the past. Most streets are still of cobble stone and very narrow. There are numerous streets that are so narrow that no automobiles are allowed through them. Like the old cities of Europe, history is everywhere! 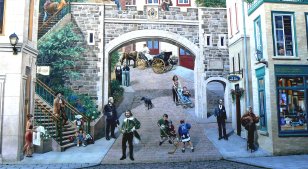 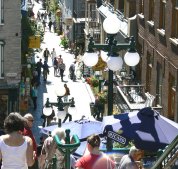 In the heart of the old city are two striking features. There is an old building which had been replastered and no longer looked authentic so an artist did a three story mural of the old city's history. The picture shows many of the historic figures from the past 400 year, but as though they had all been in the city at the same time. You can stand a look at this wall while viewing the streets around you and see all of the places in the painting, as they are today. Each person from history is shown in some location that he was believed to have actually been. Not far away is a very modern feature as the city has added an incline elevator for the visitors who are unable to climb the steep streets and stairways. 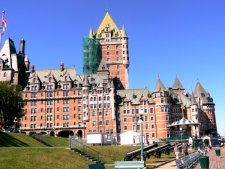 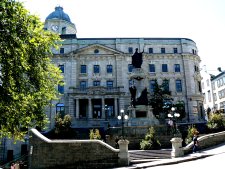 It would be very easy to spend many days exploring the old city. There buildings that are more than 300 years old still in use today. This was the French stronghold in North America until they were displaced by the British. Even today it is mostly a French speaking city, but we had no problems there as the majority of residents are also fluent in English. We found the local folks to be very friendly and out-going. 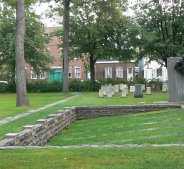 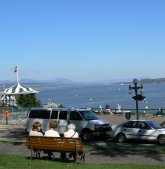 Should you ever find yourself near enough to visit, it would be a big mistake to fail to visit this wonderful old city!