"To truly experience the "anti-road rage" you also need the signs the American forces use.  They basically say "American Convoy - Stay back 100 meters Deadly force is authorized" and yes it is authorized and used. The saying here as far as vehicle travel are "Drive like you stole it" and "We Own the road"  Of course that's also why the insurgents use IEDs. "An M1114, Armored High Mobility, Multi-purpose Vehicle (Hummer or Humvee to you) should do the trick. 14,000 pounds of armor, 7.2 liter supercharged engine, with a gunners cupola for a .50 caliber machine gun should do the trick.  Comes standard with heating and Air conditioning.  Of course for the low price of $145,000 you would think it would come with a CD player (lol).  That price doesn't include the three radios that are in it, nor any other hardware and there's a bunch)  Think of that stuff as "dealer added accessories" 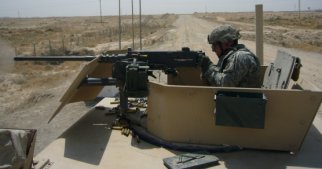 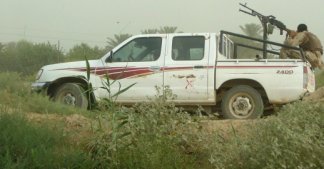 "First thing for me about the Iraqi Army is they have my admiration.  People say the American military is an all volunteer force, but it isn't compared to the Iraqis.  Not only do they all volunteer to serve, but they can quit at any time.  They get frustrated, tired, sick of it, etc, they can walk away and no longer be in the army.  Of course this also leads to issues of it's self because you never truly have accountability of the troops, nor strength.  They work 21 days straight followed by 7 days of leave (Jaza)  Until the soldiers coming back are back, you don't know if they are coming back.  A significant number wear masks when they leave the bases (as do most interpreters) because they don't want to be identified by terrorists/insurgents to protect their family.  Imagine me having to hide the fact that I'm in the Army and wearing a mask when in uniform to keep Mindy and the kids safe from attack. Granted most of them would be herding sheep if they weren't in the Army, and it's the only steady work they can get, but still......" 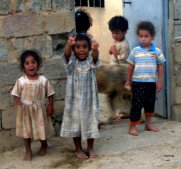 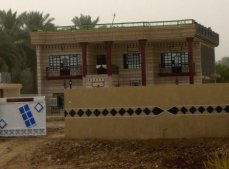 "I wanted a good picture of what the "average" Iraqi lived like.  You can't quite see it, but in the back right of the house is where the donkey stays.  Yes, that's all dirt, except the grass patch in the middle.  Fine mud brick construction with tree branches and rebar holding the mud brick roof up.  You also should notice the bedding on the grass and the reed beds.  When it's 90 as a night time low, and no AC or air movement, you sleep out side, with the chickens. " The house to the right is a wealthy family.

"Most of these pictures were taken while out on patrols with the Iraqi Army.  There might be a bit of fuzziness to them because they were taken out the window (no we don't open the bullet proof windows) of a humvee and there is dust everywhere here, including the window I took the pictures through." 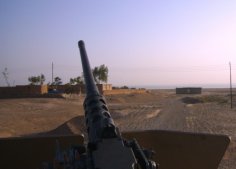 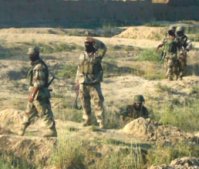 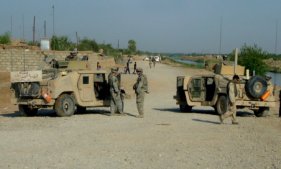 "The Iraqi village in the picture is the one being searched.  Notice the mud walls.  Most of the houses are built from mud bricks dried in the sun and then have a layer of mud put over them.  Also notice the white circles on the rooftops.  Those are satellite dishes.  In Soldiers the guy in dessert uniform without a helmet is an interpreter.  The sign on the back of the humvee says, "Stay back 100 meters. Deadly force is authorized." in Arabic.  Because of this (and we drive in the middle of the roads) driving here is like the parting of the sea.  Iraqis move to the side of the road as American convoys approach and do not come near. Incase your curious, the shorter thick antennas you see on the backs of the humvees are part of the electronic warfare (jamming) units vehicles carry."

A few questions, and their answers.

How good is the Iraq Army? "That's a tough one to give a qualified answer.  By American standards?  They suck.  By Arab standards?  Pretty good. "

Will they ever win over their own population? "Probably.  Most Iraqi's feel that the security forces (army and police) are mostly doing a good job, in this area anyway.  It's like anything, the key is basic services water and electricity."

Do you ever get a chance to make any contact with anyone who is  not a part of the Iraq Army?   "Very limited."

Are there more citizens who support the current government, or are  they a minority? "I do believe that most do.  It's believed that the majority of the insurgents (other than former Baathists) are foreign."

What is the weather like over there?  "Hotter than hell.  About what you would expect.  Most days the highs are between 110 and 120.  At night it drops to the low 90s.  No rain for the last four months and none forecasted till Nov/Dec.  It has changed my perception of what "hot" is.  Now, at 90, I'm saying, hey, this is nice. Another change that's occurred, back in May, when we got all of our wonder gear, everyone was commenting on how heavy the body armor was (it weighs about 45 pounds).  Now it's not heavy, it's just HOT!"

"This country really should have a lot going for it.  This part of it would be beautiful.  This is the origins of civilization and talk about biblical history.  It's believed that Abraham lived in the town of Ur, in Iraq.  It's also rich in other minerals than oil, assuming the country can pull it's head out of it's ass.
Most of the countryside the towns are straight out of the 1800s.  If you where to take a photo, photoshop out the power lines, satellite dishes, and internal combustion engines, you would not know when the picture was taken.  Most of the villages are constructed out of mud bricks and mud.
The Arab mind truly is different and you have to understand that when dealing with them.  A good example is how they identify themselves.  Most Americans Identify themselves as Americans first.  Not here.  Here it's self, family, tribe, clan, then country, and to most religion has to fit in there too, before country.  Of course some tribe/clan rivalries have been going on for 1000's of years.  Another example is the concept of honor and "face".  A lie isn't a lie in our sense, if it's to protect your honor.  Of course not knowing something is also dishonorable, so generally if you ask a question (say directions) you will get an answer.  Might not be true (he might not know), but you will get an answer. This job has been referred to as being a cat harder because of trying to work within the Iraqi system.
Something else I've learned since coming here is the Sunni/Shia rivalry hasn't always been what most Americans are lead to believe.  Forty  years ago it wasn't much of an issue, but it was encouraged after Iran became a religious state to help keep the Ba'ath party (mostly Sunni) in power because in all of the Arab/Muslim world only Iran and Iraq have a Shia majority. The government feared an Iranian influence.  If groups are busy at each others throats, can they worry about the tyrants at the top? 80% of the Muslims of the world are Sunni."

For any reader who may know someone stationed in Iraq, here is a need that could apply to any member of any branch who is stationed with a field unit of any type.

"One request I do have, specifically for you because you are COSTCO members, is for bulk powdered Gatorade, preferably in packets.  They do make packets that are designed to be mixed into 1 quart of water.  Our water comes in 1 liter bottles - close enough.  I know this might be/get expensive so the team will pass the hat to offset any cost.  The mess hall stocks the bottled variety and it just isn't conducive to carrying on missions.  Other powders to mix into the water also would go over well.  When it's 120 degrees, in full battle rattle (about 70 pounds including body armor) you drink a lot of water and get sick of it.   Especially when the water is piss warm.  You can only carry so much ice in the humvees.  Plus Gatorade also helps replace the minerals lost through sweating."

Theses women are dressed in the most common way in this part of Iraq. Keep in mind that typical temperatures are 110+ degrees and modern plumbing does not exist in most villages. "For the men, imagine the Body Odor after wearing it all day in that temp. Not that it truly matters because women are for having babies and men (and boys) are for fun. It's joked as "Man-Love Thursdays"! It's also curious that I've yet to see a face covering."   (August 22, 2006)