On Saturday, July 30 we moved from Cape Lookout State Park, south down the Oregon coast to a new location at Washburne State Park. This will be our new home for the month of August. We spent about three hours in the trip south and moved to very near the city of Florence, OR.  We stayed at Washburne State Park, driving abut two miles each day to work at the Hecate Head Lighthouse. We had a very nice

and roomy site with full hook-ups that include 50A electrical service. The main downside of this location is that there is no cell service of any kind, no data for any air-card, and no "over air" TV signals or radio. Satellite TV is available from some sites where you can site through the trees. To get internet or cell service from Verizon, one can go across the road to the day-use area, but even there the service is a bit slow. For good Verizon, or AT&T cell signals you have to travel about three miles to the south. There is also free Wifi in the Fred Meyer store in Florence.

I must admit that I knew coming here that this would be the case, but had hoped that our cell phone repeater would be able to get enough signal to make things work in camp, but such is not the case.While we did find that with no TV we both did much more reading and we even spent more time just taking about life, we will probably never again accept a postion that does not have both cell service and over-air TV. We watch mostly network TV shows and just don't find it worth the cost for satellite any more.

We really enjoyed the work at the lighthouse, but since it was closed for renovation on August 15, we then completed our stay here by working as leaders of the JR Ranger program and with Kirk giveing evening programs on the lighthouse and local nature. While it was an enjoyable way to volunteer, we did feel that the support by staff for this programing was less than ideal. 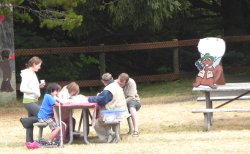 By the time that we moved back to the park interpreter program the level of activity in the park was starting to fall off due to aproaching school season, so our attendance was not large. Even so, Pam had some very loyal Jr. Rangers and lead a very successful program.

Evening programs were lightly attended and at times nobody came so that was not my favorite part of the experience. It can be difficult to put in a lot of work preparing a program when only a handful of people attend. 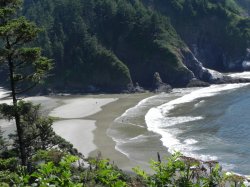 The park rangers were helpful and friendly, for the most part, but we did not feel as important to them as we have found to be the case in most places where we have volunteered in the past.

The park also has hiking trails that lead up to the lighthouse, to the old 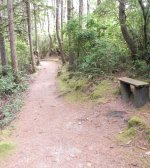 homestead and also to a beach.

In addition there is a day-use area just across the highway with a nice beach area and some picnic tables. The park dump-station is also over there. Pam's ankle has limited her ability to go on hikes but I did manage to do most of them.  The paths are well maintained and mostly pretty easy walking but with some steep places.

The experience has been a good one, but our favorite lighthouse remains Cape Mears. We did make some good friends while here and we also had the privilage of meeting several Escapee's members that we had not met previously.

One thing that anyone who considers spending a summer on the Oregon coast should always keep in mind is the weather. Our August was an unusually warm, dry one, but there were still very few days when 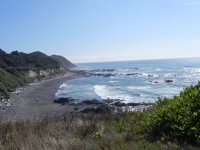 temperatures were above 70 degrees for much of the day. The warmest day of all was only 76 and there were days when the high temperature did not reach 70. The distance into Forence is only about 15 miles, but it can become a it bothersome if you have to go there in order to get internet access. There are several major grocery chains and a Fred Meyer store, but no Wal-Mart. 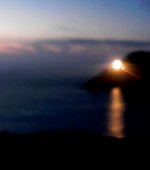 The lighthouse tours mean that the guides lead groups up the 58 stairs about one trip every 30 to 45 minutes, staying there for about 5 minutes each trip. We took groups of 4 to 6 people at a time. You spend 4 or 5 hours doing this for three days a week in most cases. I did enjoy the tours, but it can be pretty tiring. Pam was setting up the tour groups as we used tickets for the groups to keep the tours in the order which people arrived at the lighthouse, without requiring them to stand in a line. Since her ankle prevented her from doing the tours, she did only that while most of us preferred to lead tours anyway.

This was a good way to spend a month, but we would probably not choose to return there in the future. We will remember many things about it fondly, but it will not be our #1 experience. 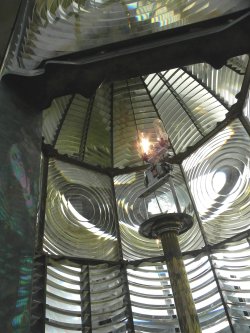