For any reader who may know someone stationed in Iraq, here is a need that could apply to any member of any branch who is stationed with a field unit of any type.

"One request I do have, specifically for you because you are COSTCO members, is for bulk powdered Gatorade, preferably in packets. They do make packets that are designed to be mixed into 1 quart of water. Our water comes in 1 liter bottles - close enough. I know this might be/get expensive so the team will pass the hat to offset any cost. The mess hall stocks the bottled variety and it just isn't conducive to carrying on missions. Other powders to mix into the water also would go over well. When it's 120 degrees, in full battle rattle (about 70 pounds including body armor) you drink a lot of water and get sick of it. Especially when the water is piss warm. You can only carry so much ice in the humvees. Plus Gatorade also helps replace the minerals lost through sweating."

"We work mostly with the officers, but do work with all soldiers for some things. While the IA has the ranks of NCO's, they don't have an NCO corps in any way near the American sense." (Actually, very few countries have an NCO corps like the US military does.) "How can you expect the NCO's to do their job when one of their fears is that if the upset the officers badly enough, they will get an immediate demotion back to basic Soldier? That fear was expressed by the Battalion Sergeant Major. Literally, they have Captains doing work that would be the job of a Buck Sergeant in our army."

"Most Iraqi's don't want to expend any effort in solving issues. They want someone else (of higher position) to do it for them. A good example is the platoon sergeant for the medics told me awhile back that he wanted a bed to put in the aid station. I replied, okay, have you asked for a bed from his unit? No, of course not, that would have required effort and possibly rejection on his part. Much simpler just to have me do it. You also get sick of the IA telling you that this or that system isn't working, (agreed it probably is horribly broke - like any kind of re-supply) but when you ask them what they have done to help the situation, or work on the problem, you get either the "deer-in-the-headlights" look, or the ever popular shoulder shrug while saying "Im sha Allah" which is "god willing". " Ken states that "god willing" is a common way to avoid work, or more importantly responsibility in Iraqi society.

"Most of the more senior ranks are from the old Iraqi Army and quite a few fought in the Iran-Iraq war, both gulf wars, misc. fights with Kurds, etc. Plus the unit saw some major action a few months prior to us getting here, and no matter what the mission is, IED's go off and small arms fire is a regular occurrence on missions (both IA and American)." 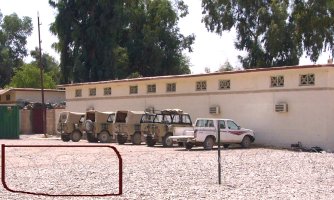 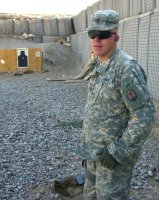 This is where Team Striker lives. Notice the wire that is circled in the picture, and note that it is inside of the compound. "I've also sent a picture of our team house. We have been adding the concertina wire around it to improve our security since our house sits about 100 meters from the edge of the base. The green vehicles are "Waz's". Basically Russian jeeps. " 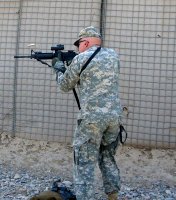 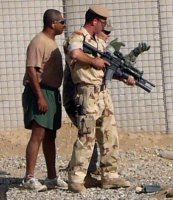 In the second picture, note the ejected shell casing that is just above the gun barrel. In Iraq, even medics carry weapons and practice with them. "We were practicing some of the close quarters combat techniques we've been learning from the local Special Forces Team. As you see, it's short range - that's the 10 meter line. But that's were most of the combat here has been taking place. It's also more about speed than the normal for Army ranges. We have been doing most of our shooting without all of the Army stuff - helmet and such. The method is get the muscles used to doing it the same way every time and then it won't matter what you are wearing. Of course muscle memory is all about the number of rounds fired. I've said for a long time that the average Soldier doesn't fire enough rounds. Most of them only fire about 100 rounds a year - 40 rounds qualification and 16 rounds to confirm zero twice a year. I've probably fired around 1000 rounds since I've been here."

"In the time I've been here, I've fired more rounds than in the previous 19 years. Shooting is also a good stress relief. I doubt this is something the majority our Soldiers here are doing, but hey, there are some advantages to doing this mission."

"The Iraqi Battalion Commander came with us. He's the new one as the last one was killed in a car bomb."