Here are some of the latest pictures that Ken has sent from his station in Iraq. All bold print is quoted from Ken's email.

In early May, Team Buffalo suffered their first casualty, SFC David Rodriquez. Rod, Ken's closest friend in Iraq, was with an Iraqi patrol when he was injured by a "local control" IED. Such devices are controlled by a hidden terrorist with a trigger device and a wire leading to the device. The idea is to wait for the IA soldiers to pass and thus to get the American. Rod suffered a broken leg and some other injuries including to the face from flying gravel and dirt. He was evacuated first to Germany and then to Ft. Sam Houston, where he is recovering. Fortunately, he is expected to fully recover and return to duty, however he will not be returning to Iraq to rejoin the team.

The first shot is one of Ken with the First Sergeant of the IA troops that he works with. Ken is wearing his "blast glasses" which are worn at any time he is outside of the compound. He has another name for them, but this is a public website! As one can easily tell from these pictures, he is very popular with the IA soldiers and officers as well. The third picture shows Ken at work doing emergency field medical training for the troops.

*The second picture* was taken during a mission of myself and two of our interpreters. They happen to be the two I like the best. The team has 5 total, 4 local Iraqis (all from a village about 45 minutes from the base) and one a US contractor from the US. Those two are brothers. I've never pursued it further, but most of the terps learned English in school. I've always been curious if they attended school more than the average, are they a bit more "well-to-do" as if English is taught in school, why more Iraqis don't speak it, plus is that the country as a whole has a 50-60% illiteracy rate. I've always been curious why they all attended school, but the majority of the country didn't.

*Dinner* was taken in the Iraqi mess hall. Usually their meals consist of some kind of boiled meat, this time fish, rice and bread. Yes the red in the back pail is from blood. That is usually reduced and some seasonings added and served as a broth/soup. It's very plain, but not bad tasting, yes I've eaten with them. Of course as you can guess by the picture, you always run the risk of getting sick because of lack of sanitation. Nobody from the team has gotten sick, but there have been times 40 of the IA have gotten sick the same day because of lack of sanitation. This is just the way of the Iraqis, at least outside of the cities. The first picture is from an IA field kitchen. Most of their cooking is done with wood or charcoal and looks more like an army from a century ago.

*Down Town*, *HMMWVs, IA HMMWV *and* US Troops* were all taken during a recent mission, part of the "Clear and Hold" strategy in this area. We ended up building a patrol base overlooking a bridge believed to be a major route for insurgents. It's just different troops kind of contrasting the differences between the US and the IA, plus a look of another village in this area.

The next two pictures are of IA weapons training. Ken reports that such training is a weak area of the Iraqi's. He says that they just don't do much real training and seldom work very hard at it when they do. In the first picture they are training on use of a Russian made, machine gun and in the second on firing an RPG (rocket propelled grenade). The last is a shot of a US F-16 outside of a shelter on a former Iraqi base.

*#1* is a picture taken in the IA Battalion Headquarters of a weapons cache found by the IA. They are very likely to pick them up and bring them back to the base after they find them. The US generally blows them in place, or at least in the area. I will be sending some pictures of a cache being removed from it's location later, I have to get the picture from a buddy. It's kind of interesting, the weapons cache has kind of become the "body count" from Vietnam. It's almost a tool used to "keep score" and judge the success of a mission. The second and third shots are from a wrestling match between a US soldier and an Iraqi. Wrestling is a very common recreation among the Iraqi troops and seems to be almost a national pass-time. Even though the US troops tend to be much better conditioned, it is rare for one to win a wrestling match with the Iraqi's. 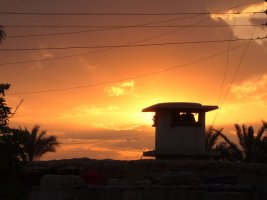 *Wrong on many lvls* - This was taken during a recent mission. The title comes from the fact we can play a game of "What's wrong with this picture" with it. The Soldier is a Major on the team (who a few days prior was attempting to convince me of his infantry prowess - he's infantry by branch. If you notice, he doesn't have a weapon, but wait, his M4, with a grenade launcher attached IS in the picture, in the hands of the interpreter, who by policy isn't supposed to be armed (most are though). Guess he missed the training part about not surrendering your weapon. And this my friends and readers, demonstrates just one of the problems that we have when we use so many part-time soldiers in positions of command and the added danger to our professional soldiers when they are put under the command of one.

The last two shots are from a dust storm that took place where they are stationed recently, and the sunset following it. It is a unique part of the world. This may well be the last installment of the combat part of the "Team Buffalo" story, as they now have been told that they will be leaving Iraq for Kuwait and debriefing on June 4, and the target date to fly back to Ft. Hood for processing is June 8.