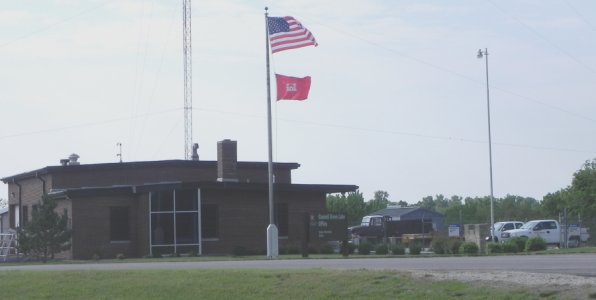 US Army, Corps of Engineers

Council Grove Lake is one of the smaller lakes in the flood control program and is a part of the plan authorized by Congress in 1950. Construction was begun in late 1960 and the lake was opened to public use in 1964.

This location asks for only 15 hours per week of their volunteers and that for one person. Couples are encouraged to put in 20 hours between them, so this is one of the easier locations for a volunteer. Like most places, extra work is very much appreciated by the staff here.

Volunteers are given a choice of where they wish to stay, as the gate duties here are all done by contract employees through a bid system, like most Corps lakes. Public contact by the volunteers is very limited. The nice part of that

is that we do not have an obligation to be available on weekends, as campground hosts nearly always do. The volunteer sites vary here but we believe that we have a very nice one. We are located in Kit Carson campground and in a site that has traditionally been a campground host location. We have full hook-ups and this is the only site in this campground which does. We do only have 30A electrical service, but the site is in total shade and so it probably will not be so critical for use of air conditioners as it could be. We will also be leaving here at the end of July when the heat really sets in.

We are only about a mile from the small town of Council Grove, which has limited shopping and services. About thirty miles away are either Junction City or Manhattan, both of which have a Super Wal-Mart and most commonly found 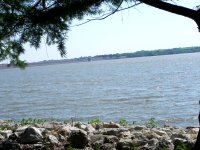 major chain stores. Topeka is about an hour away with pretty much anything a person might want.

fishermen.Our campground is one of the smaller ones on the lake with only twenty sites, with all except one having both water and electricity. The dump station is about 1/2 mile down the road at the next campground. The shore line is a bit rocky in most areas here so beaching areas for boats are limited, but we do have a boat ramp for launching. Most of the campsites are near the water and most have at least some shade. Shade can be important here as summer days can get quite hot. The majority of campsites are also reasonably level, which can be a problem with Corps parks. 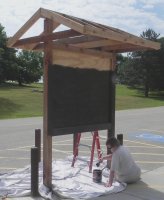 We began our work schedule here by painting a newly constructed information kiosk in the park just to our north which is presently closed for remodeling. Federal job stimulus money is being used to  put in 50A electrical to each RV site there as well as reconstruction of some of the facilities that have been damaged by high lake levels in past years. The parks were built in the early 70's so this is some needed work. The kiosk is located next to a swimming area and is replacing one that was damaged. With both of us working we finished the task in about 5 hours of work.

With the park closed the Canada Geese were taking full advantage of the nice sand beach. It seems to have been

family day on the beach and the youngsters were quite entertaining. There is a large resident flock of geese here on this lake and the goslings are just beginning to  swim with the adults. The parents were keeping them close at all times and it was quite a scene.

Another job that we have done here is to remove the brush that has grown up to block the view of signs in the parks around the lake. This 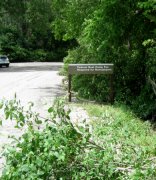 can be a problem for both the visitor and the enforcement rangers as it is just a little difficult to obey a rule that one does not know about. I spent most of one day in driving around the lake and clipping all brush that inhibits a clear view of the signs in the campgrounds and around the boat ramps.   Since we do not have access to corps trucks, I simply cut and piled the offending limbs and one of the rangers then came to haul it away. The work isn't hard but with the humidity high, it was quite easy to work up a serious sweat!

In addition to this, the plan was for me to build some new portable barricades for use in diverting roads, reserving sites and other traffic direction around the lake as a first step to this work I sorted all of the existing barricades, finding that most were in poor shape, with a few still reasonably good but in need of paint. I cleaned those up and 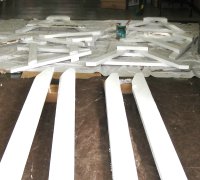 repainted them, with plans to start to build new ones just as soon as the ranger gets some form that volunteers need to read and sign before they are allowed to use any power tools.  There are some other wood projects that we have been told of, but which can not be started until I gain access to the wood shop and power saws. 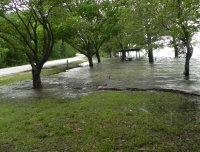 Starting about a week after our arrival, the rains were frequent and heavy. On the weekend of June 13 & 14 my rain gauge recorded more than 7 inches of rain and there were areas that drain into the lake that received more than double what we had. Since there had been flooding farther down stream on the river the lake managers were not allowed to open the gates right away and as a result the lake began to rise very rapidly. At one point the level was coming up at a rate of must over two inches per hour. The park rangers stopped to let us know that we should be ready to move to higher campsites in the event that this should continue. For that reason we packed up our belongings and prepared to move if we should be directed to do so. In the process of preparing to move,I went to start the motorhome, but it did not start! After several attempts, our road service was called and the decision was made to have it towed into Manhattan to a Ford truck shop for repairs. While we could have stayed in the motorhome at the shop, we chose to spend 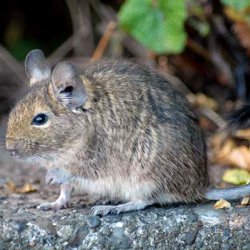 the time with my uncle who has a farm just ten miles from the campground where we have been staying. That turned out to be a good move as the repair took longer than expected and it was the following Friday before it was ready. It turns out that the fuel pump was not working and that is why it would not start. After replacement of the pump, the problem was not solved and they then discovered that a rat had made a home in our chassis and had chewed through some of the wires in the construction of that home.

Both of the other volunteers who reside here had mentioned to Pam that there were rat problems here and when I mentioned that to the lead ranger, he did agree that it was a known problem. For some reason, we had not been warned of this and had we been, I have found in other locations that stringing rope lights all around the underside of the RV will keep the little buggers away, but nobody even mentioned the problem! In view of that and the fact that we no longer have our rope lights for the RV, we have chosen to leave the park a month early. We dislike doing this, but with a cost of $1300+ for repairs and the fact that I still did not have clearance to use the saws, we just feel that the risk is too great. For that reason, we have now moved to my uncle's farm where we will stay for two weeks before moving to the property of some friends in Wichita, KS until time to move on to Kentucky.