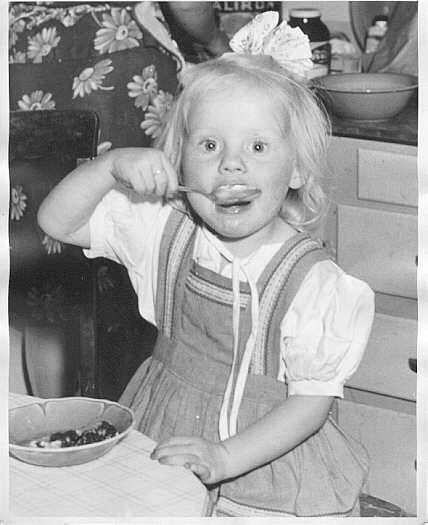 Pam was born in Glendale, Ca. and lived her first years in Oakland. The family moved to Redlands, Ca. when Pam was nine, returning to her father’s hometown. As a girl Pam was active in Job’s Daughters and in the Presbyterian Church, where she sang in the choir and was an officer in the youth organizations. In high school she was a majorette and a member of drama club. Pam graduated from Redlands HS in 1959 and attended college at the University of Dubuque  in Iowa and the University of Calif. at Riverside, where she was a student when she met Kirk while both were visiting Disney Land in January of 1961. She is the second of five children, with three sisters and one brother, all of whom still reside in California. She learned to knit at the age of five, and started to sew at eight. Today she also crochets, does punch needle, cross-stitch, latch hook and most other crafts. She sometimes designs her own clothing. Like Kirk, Pam has always loved the outdoors. He paternal grandmother was a gardener and a horsewoman and she taught Pam to love things outdoors too, as well as being the one who taught Pam to sew, to read and to love libraries. Her grandmother was a very forceful woman and was probably the most supportive of Pam in her choice of a husband who came from such a different world.