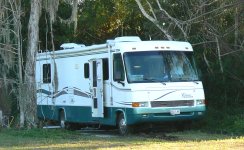 On November 29, 2008 we arrived at our winter stop, the Shark Valley Area. Everglades NP is the third largest national park in the contiguous 48 states. This park is about 1.5 million acres and has a very wide range of topography. Our actual home was in what the park staff call the Trail Center and was physically just inside of the Big Cypress National Preserve, which is the park's immediate neighbor. It was privately held land which the park service purchased for a residence area for seasonal employees and it contains four housing units and five RV pads.

The Trail Center is an employee only area and is located just off of US41 and is behind a locked gate. We have full hook-ups with 50A power and there is also a laundry room with three washers and three dryers for out use. The RV pads are not the best and I must say that our site was the one that we consider to be the very best, even though we nearly got stuck getting parked on our pad. The other RV sites are what we consider to be "unacceptable." 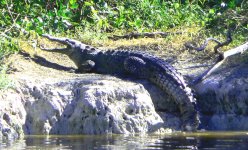 We had two days to get setteled into our RV site and on December 2 we began training for our work here. We attended the same training that seasonal rangers attend before they begin work. This was six days of very intense training. In fact, it has been the most complete training that we have had in any place where we have done interpretive talks or tours. Our work was about the same as that done by seasonal park rangers, although there were times that we did not feel that we were treated as equals. We each worked four eight hour days each week for a total of sixty four hours total per week. With our work hours mostly spent on our feet, we feel that the hours were excessive, especially for volunteers who are past the age of retirement. We truly enjoyed the work, even though there were times that we got extremely tired and we had little time for exploring the area. With shopping at least thirty miles away it always took one day for that and one for laundry and house-work, leaving only one day per week for seeing the area. 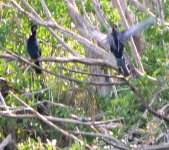 While this is the only place in the entire world that has a native population of both alligators and crocodiles, they are not the only thing worth seeing in this park. Crocodiles are fairly common in the Flamingo Area and the alligator is common throughout the park, birds are the most wide spread kind of wildlife which visitors see. Shark Valley is home to many alligators and in the forty years that the area has been open to the public, they have reached a point where most of them just ignore the visitors and do whatever they would if we were not present. 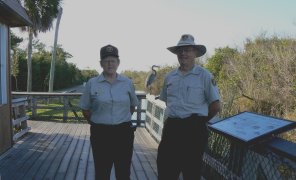 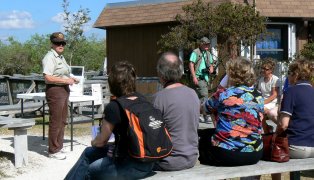 Each of us were responsible to create our own programs for visitors which were then scheduled to take place as a part of the published visitor activities. Each work day, Pam would give a 45 minute talk about wading birds in our part of the park, while Kirk's daily visitor talks were about his favorite subject, alligators. We each spent some time working in the visitor center answering visitor questions and selling  items from the store, as well as working with the Junior Ranger program. Our work schedule did vary from one day to the next and some days we would be outdoors pretty much all day. There were also times that we would go out on the tour route and set up a spotting scop for bird observation or do nature talks, several miles from the visitor center.

Probably the most unique part of our duties in the Shark Valley area were those of protecting the alligators from the visitors! Surprisingly to us, while most people do keep a healthy distance between themselves and a basking alligator, there were many visitors who did not seem to grasp the fact that even though those alligators were easily approachable, they are wild animals and can be dangerous. As part of our duties, we had to deal with people who did everything from hitting one with a stick, pulling the tail, or attempting to pose touching one for a picture. 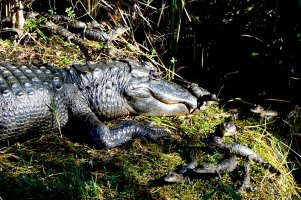 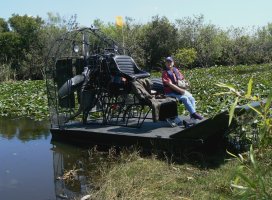 While there we got to go out with one of the law enforcement rangers for a tour of the back country by airboat. It showed us a prospective of the Everglades that few people get a chance to see. In addition to the alligator population, the park is a birder's paradise, particularly for the months of Jan. & Feb. Commonly see bird species cover a very wide range with many of them nesting in the winter home and some who stay all year.

There were also many other things to see and do in Everglades National park.  Some of the most entertaining and exciting times were because of the visitors and the things which they did. It was a rare week when we did not have to stop a visitor from getting too close to the alligators for picture or some other foolish reason. But the most entertaining part was the wildlife that we observed while on duty.

We probably would not again work so many hours for so poor an RV site, but we are also very glad to have had this experience and will long remember the people we worked with and the wonderful things that we experienced. 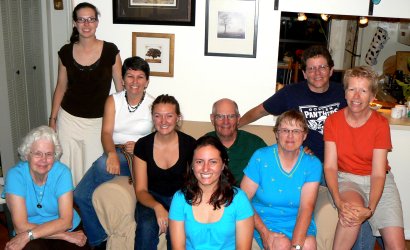