In September of this year I had my 70th birthday and our three sons joined forces to allow me an adventure that I have long wished for, but never done. My first ride in a hot air balloon!

The day began with a meeting of the passengers and pilot before sunrise and then we were all driven to an open field where the unpacking of the balloon began. While the crew unloaded the balloon, the pilot gave instructions for the flight and a short safety briefing. Once the balloon had been

spread on the ground, the basket is unloaded, laid on it's side and attached to the balloon shroud lines. Next is to start inflating the balloon with ordinary air by use of fans powered by gasoline engines. This process is when most of us began to realize just how large one of these balloons really is. It takes about 15 minutes to get the

balloon out and blow it full of cold air. The flight crew is assisted by those of us who 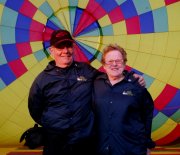 will be going on the flight and it is really a part of the total experience.

Once the balloon is inflated with cold air the crew lets everyone pose inside of the mouth of the balloon for pictures. It does bring home the amazing size that is required to life a basket with a dozen people off of the ground. Even though Pam was not going on the flight, the crew did include her in everthing on the ground and she went with the chase crew as they followed us on the ground when in flight. It was kind of neat to have her go, must as I did when she went skydiving.

Once air was in the balloon and everyone had pictures taken with it, then came the process of heating the air to make the balloon lift from the ground and then pull the basket upright. This part takes a little bit of knowledge since you really don't want that hot propane flame to melt the balloon skin! It takes about half an hour or a little 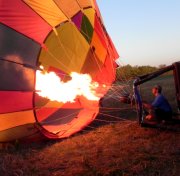 more to get the balloon ready for flight. The entire process was one that I found to be very interesting and more involved than one might first believe. The crew was only two men, with a fair amount of assistance from those of us who were flying with them. These folks really are great people to make a first flight with.

After what seems like a long time, but is really only about 10 minutes, the balloon lifts off of the ground and gently pulls the basket into an upright position, while the pilot scrambles to ride the basket inot position, just in case it might try and leave without him!  The next step is to board the basket and get ready for take-off. The basket has two large passenger compartments and one smaller one for the propane tanks, the pilot, a copilot.  I was fortunate to be given the copilot spot since there was only one pilot flying with us. That allowed me to be able to see the instruments and to get a close up view of how things work.

The lift-off was amazingly smooth with little sense of motion at all. I think that the most amazing part was the fact that in the balloon you get the feeling that you are sitting still and the world is what is moving. It is almost

as though the ground falls away and then starts to slide to one direction or the other. The pilot has some control over directions of travel by changing the altitude as wind directions

usually change as you move up or down. I was rather surprised by just how much control they actually have.  We were in an area near several airports so we were restricted to 3000 feet and below due to powered aircraft in the area, but that is usually about the upper altitude of most balloon flights anyway. We did see several airplanes go by at altitudes similar to ours at different times but they kept well clear of our area. Our pilot did have an aircraft radion and did notify the nearest airport of our takeoff and also upon landing. We also heard one pilot comment on our flight location, but didn't talk with any of them, although our pilot did say that is happens occasionally.

One of the neat things which balloonists love to do is what they call the "splash & dash" where they drop down and touch the floor of the basket to the water. We didn't even get our feet wet!

We spent just over an hour in flight and had a really great time. There were 12 passengers in addition to me, which was a full capacity trip. There is no wind effect at all, due to the balloon moving with the air leaves almost no relative motion and so there is no windchill effect.  For the flight we carried 65 gallons of propane and 42 gallons of that was consumed. They stated that the cost of replacement of a balloon equipped as this one was is roughly $70,000! Another interesting aspect of balloon flight is that the wise pilot does his best to avoid busy roadways because distracted drivers have been know to sue the balloonist for causing them to have an accident!

All too soon our hour of flight time was over and it was time to descend back to earth again. In addition to radio contact with aircraft, or pilot also had a radio to talk to the chase vehicle so that he could direct them to the proper roads to be where we expected to land. We came in low over some houses as we approached the field he chose to land and it was interesting to

note that every dog seemed to become very agressive to our passage and the sound of the burner brought occupants from the houses to see what was happening. Landings in a balloon are not an exact science and are rather more interesting than what is experienced with flight in a light airplane. While the pilot does steer for the intended landing spot, he must choose a location with needed 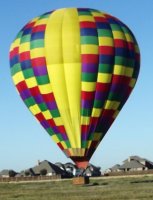 wind direction to get there and if the winds should shift or die away, then you pick a new spot, as you may not go to the selected location. That happened to be the case for us this day. We had chosen a park just off of the the main route, but with a wind layer that died on us, we had to change to an open field a few blocks from the intended landing spot.

Once you are back on the ground it is time to empty the balloon and pack it away for return to base. It actually takes more patience to deflate the balloon than it did to get air into it at the start.

There is no means of rushing the air out and they do not walk on it or anything of that sort but simply open up the top and wait for it to empty. This process takes around 15 minutes and then things are packed into storage racks and loaded into the trailer for transport back to base.

Once all of the work was done, there was one final thing which completes the proper flight by hot air balloon. There is a tradition that balloon flights should end with champagne that dates back to the early balloon flights in France two hundred or more years ago. Tradition says that this form of flight began in wine country and each flight was ended the participants would toast the successful flight in the vintage grown by the owners of the vineyard where the balloon came back to earth!

The Balloonist's Prayer
The winds have welcomed you with softness.
The sun has blessed you with his warm hands.
You have flown so high and so well
that God joined you in laughter
and set you gently back into
the loving arms of Mother Earth.
Should you ever want to have this experience, let me suggest that you contact Rohr Balloons of McKinney, TX.