We arrived here at the hatchery on August 30, 2010 with high hopes and great anticipation of our first experience in a fish hatchery. With our past experience with the Fish 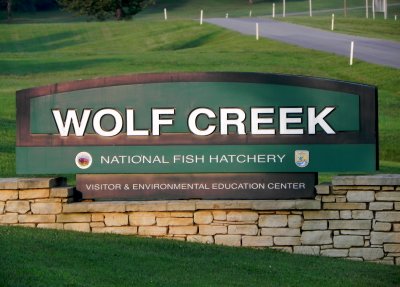 & Wildlife Service, we were expecting the very best.

We arrived on a Monday afternoon and were greeted warmly by the other volunteers in the village. A quick check with the volunteer coordinator and one of the volunteers then showed us to our site. We were given our first two days just to get set up and moved into our home for the next three months.

The volunteer village is as attractive as any we have seen in any of the places that we have yet spent any time. This park not only has very large, level sites, but there are even flowers and landscaping. The only weak spot is that there are no large trees. New trees have been planted but that will take a few years before one can sit under them.

All RV sites have complete hook-ups with 50/30/20A outlets, water, sewer and propane provided. The park also has limited wifi for the RVers to use. The sites are edged in landscape timbers and are completely graveled. Each site also has a picnic table and fire ring.  There ample space between sites for privacy, yet near enough for good neighbor contacts.

Volunteers here have the visitor center as their primary duty. Only two volunteers work in the fish hatchery and those who wish to spend time in the hatchery are expected to do so on their own time. I never figured out how you get to work in the hatchery. Since learning about a hatchery is the main reason that we came, this is one of the things that I first had difficulty with. I was lead to believe that we would be leading tours of the hatchery before we came. 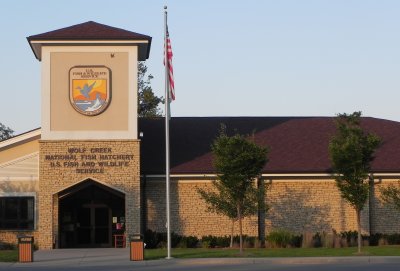 When training began on Thursday morning, it started with extensive discussion of how to clean things, in particular the public restrooms and the restroom for the office staff, all given by two volunteers. There was a list of harsh chemicals that we were expected to use, including one that I had previously told the volunteer coordinator that effected Pam's asthma. We were also told by these two ladies that the manager would come around and inspect behind us when he had time. There was even a three page check list of things to be cleaned each day and we were told that on slow visitor days we should do extra cleaning.

By noon of our first day it was apparent that we did not belong in this position. While at lunch I printed out a copy of our resume, where it states that we do not clean public restrooms.  When I showed this to the coordinator, she immediately knew exactly what the problem was, even though she didn't take the time to read it! She claimed that she had missed that when I sent the resume, more than six months ago. We then offered to leave but she insisted that she would make adjustments to things to keep us there. We stayed, even though that turned out to be a big mistake.

Of all places that we have been in the past ten years, this is the very first where so little trust is placed in their volunteers. Not only is it unusual in that none are trusted to have a key to anything, they even keep the toilet paper used in the employee restroom locked up and you have to get one of them to get if when you need TP if assigned to clean their toilet. We got the distiinct feeling that the manager considers RV volunteers to be little better than the people along the roads with signs "Will work for food."  At no time did he seem at all friendly or welcoming. We also have several other issues that we believe to be problems at this facility.

The net result was that Abby, the coordinator, told the other volunteers that they would have to do extra cleaning because we were refusing to do so. She also gossiped with the two ladies who were assigned to train us and caused very hard feelings on their part and when we asked for a meeting with them in her presence, she refused to do that but said that she would take care of it. We again told her that we felt it best if we leave, but she once more assured us that she would get things corrected.  At this point we had been there for about ten days, so agreed to at least give it a few more days. On the following Monday she came in, called us into a meeting with the manager and told us that we were causing too many problems and were to leave immediately. 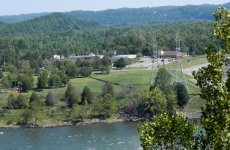 We were accused by the manager of personal attacks on him, which was not true, since we don't even know him. As far as I could tell, the hatehery is well run, with the exception of the issues that we had. There were numerous other outrageous statements made about what we were supposed to have done and even though I spent more than an hour in an attempt to at least smooth things so that we could leave without hard feelings, it was made pretty clear that neither the volunteer coordinator nor the hatchery manager were willing to have any part in that.

We left the park and and were on the road by about 11 am and never looked back. I suppose that in an agency where we have had so many outstanding experiences, it was inevitable that one day we would meet some people who were not that way, but we were totally unprepaired for that event. We still believe in the Fish and Wildlife Service and in fact will be going to another wildlife refuge this coming winter. I am still puzzeled by the events that took place at this location and have no idea how it could have gone so wrong. The simple fact is that if they had been honest about the duties of an RV volunteer, we would never have gone here at all. Some people do not mind acting as janitors for their RV site and that is fine, but we were very much mislead and it is difficult to see how it could have been an accident.

Simply put, it is our opinion that if you do not wish to be a volunteer janitor, or dislike being at the bottom of the pecking order, this is not a good place for you to consider volunteering.

I have edited this several times in an effort to be honest, and also fair. I do believe that Wolf Creek could be a great experience. I think that had we been the two volunteers who were allowed to work int he hatchery, we would have had an entirely different experience and might well be reccomending it. With an honest picture given of the works desiderd even the visitor center could be good for some people, but a volunteer coordinator who is a good people manager and who is not afraid of confrontations is needed. These do not seem to be bad people and they probably do have good intentions. A big dose of honesty would go a long way to solve, or avoid the issues here. We will always also feel some guilt for having recruited another copule to go there before us, who also left early due to problems in the volunteer program.

Just an update to this page for those who might be interested. James Gray, the Project Leader of this facility has now posted on Escapees fourms to  attack my integrity, more than a year after I reported our unhappy experience on the fourm.  As I said in response, "We all know that no employee of our federal government would ever tell a lie to help his position. Don't we?: