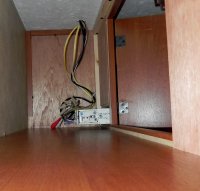 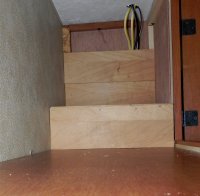 Here we see the interior of the cabinet above the dinette as it was when purchased. The radio is not protected nor the wires so I installed a steped protection for both. The lower section is held in by screws, to allow access, if needed.
I also put in a vertical divider in the center, between the two access doors, thus making this two separate cabinets. I still need to get a light to put under the cabinet for use at the table to read or do other activities at night. I will get a florescent light and tap into the power where it is accessable to the radio. I did drill a hole through the bottom behind the radio to put wires through to get to the light. The cabinet has a double bottom so there is space between the to for those wires.
We are taking the day off tomorrow to go to a wildlife program with neighbors and later to mow the lawn. The next project is to do some work on the closet just inside of the entry door.

I have been busy of late doing some work with the maintenance crew here in our community,

but have also made progress with the new RV. First of all, we completed the modification and installation of the TV mounting and the associated wood work. Next I installed some wood inside of the cabinets under Pam's kitchen drawers to enable use of that space for small item storage.

Of course, all of this also means setting up of new sewer hoses, fresh water fittings and filters, as well as sorting and moving all of the many things from the previous RV to our new, much smaller one. Just like always, we have had to purchase more things than anticipated and we find that we failed to remove a few items from the old motorhome that we had intended to keep! But that is just part of 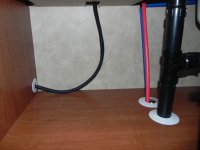 RV living so we move ahead.

My latest project completed was modifying the large cabinet under the kitchen sink, for better use of the space. This involved installing something to prevent things from storing up against the side of the water heater and plumbing, adding a partial shelf to make better use of the tall space and devising some kind of protection for the propane line to the stove top.

We are still moving forward with our preparation of the new RV, but Pam's visit to the hospital did set us back a week or so. In addition we find that having spent somewhat more than planned for the new RV, rather than a used one has slowed progress from budget limitations. Even so, we have made some 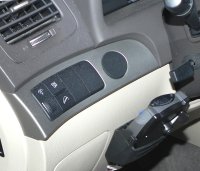 progress on this and so I need to get busy and update folks.

One of the recent projects completed was the installing of a new Prodigy brake control. By getting it from Amazon I was able to find one for $116 and it is now in and ready to travel!

The most difficult part of this was locating the connecting plug in the Kia wire-harness, as it was hidden behind one of the trip panels and taped to other wires. Once that was done it was just a matter of routing the wire and choosing a good location.

In addition we have found that the task of sorting all of the things from the motorhome into a size that fits into the new RV is a major undertaking. The choosing of just what repair materials and tools are vital with even shorter trips by RV has taken a great deal of thought and time.

I also installed a pair of hooks in the main storage bay to hole the awning hook, right above the opening on the entry side of the trailer. That should keep it readily available and with storage at a premium, maximizing it's use is critical. 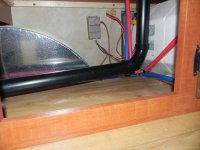 Storage inside also needs some work as many of the cabinets have things inside that need separation from the various things one may wish to carry. The first cabinet altered has 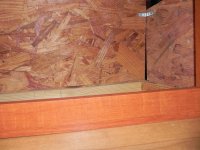 been under the stove, where the plumbing from the sink and water heater were completely open to anything that might be placed there. I made some containment walls for this purpose, and this will be an ongoing project, to be continued.

We finally are approaching having things ready to tow and try out the new RV! On Friday, April 27, we took the Kia back to Athens RV where we bought the trailer to get the hitch installed. The Borrego came with the framework and receiver already installed, but we needed to get a ball mount assembyl and also have the mount added for the sway control. As our dealer had included that in the price of the trailer, we were off to Athens. 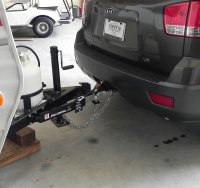 That process took less than an hour and so we decided to run on into Athens, since we had not been there in 15 years or so and it was only a couple of miles away. Pam has been on medication for bronchitis for 10 days so we were not surprised by her cough, but she suddenly developed chest pains so severe that we made a trip to the hospital, in fear that she might be having a heart attack! As it turns out, it was actually spasms that were caused by the bronchitis, but that event was painful for her and frightening for me and the result was two days spent in Athens hospital. Despite it all, on Sat. I did complete the assembly of the hitch. Barring any more excitement, I plan to wire up the new Prodigy brake control today and our Borrego should be ready to travel!

the gound for her to use comfortably as a regular vehicle. So my truck got put on hold .........

Last Monday we took a trip to Granbury to visit our friends Bud & Dayle and while there we discovered the vehicle that seems to really fit our needs! It is a 2009, Kia Borrego. They were introduced to be tow vehicles in the midsize SUV

market. Ours came with a complete tow package including electronic stability control, hitch, and prewire for tow lights and brake. Now we only need to get the right hitch for our receiver and a brake control and we will be ready to go!

We traded our 2009 CR-V for the Borrego with a few more miles, but the warranty was out on the CR-V while the Borrego has more than 50K of the 100K warranty remaining. It drives nice and it is far more quiet than the CR-V was, but we did loose significant fuel mileage in the process.

We have begun work to make this new RV ours and getting it to feel like home. Pam has been shopping for rugs

and considering making new window treatments, while I have been on two early changes. The first was to put on a pair of skid wheels mounted to the V-bar assemblies that are at the rear of most trailers because it is

inevitable that they will drag on occasion. To make that less of a problem, the aftermarket makes quite a range of products, but I chose to add a pair of small wheels to each side of the RV. This will make that occasional drag much less stressful on both the RV and the driver!

mounted and so have made an oak board to support it that I will stain to match the cabinets and mount on the wall for support. I am also making a twin for it to do on the wall of the other side in order to make them look balanced. Our granddaughter has been visiting us for the past week and so these projects have been on hold, but I should get back to this in the next few days.

We are still in process of shopping for trucks to tow with, but have kind of put that on hold for a time as well. We plan to spend some time traveling without the RV in late May and into June so the tow truck is not a high priority at this time. We have seen a few trucks that are of interest and will probably buy a crew-cab truck of medium size, eventually. The current plan is to trade or CR-V or to sell it to someone. We find that taking some time is one of the advantages of being only part-time RVers once more!

Yesterday we took delivery on our new RV! It is so good to be RV owners once more. We borrowed a truck from our neighbor to bring it home and now we begin to do a search for a tow vehicle and also to 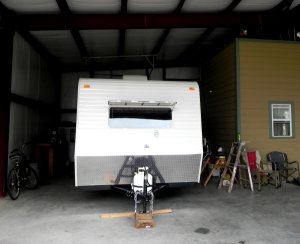 make modifications to make it better suit us. I will be posting more as this progresses. For now, here is the new RV.

It is so great to live in a community where the biggest problem when you need to use a truck is selecting which neighbor's truck to use. As it was several of our neighbors were leaving to take their RVs out and so we only had three trucks to choose from. The 1 ton, diesel that we did use hardly knew we were towing anything!

The trailer that we have chosen is 19 feet long inside and 22 feet over all. It weighs only 3,5000 pounds and we think that we will really be happy with it.

The next phase of the project is to begin modifying things to make it suit our needs and desires, better. 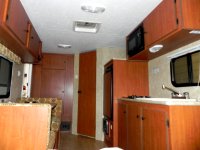 Today we purchased some lumber to start the first project, which is moving the TV mounting somewhat. In order to do so, I need to put in some woodwork to support it. Then will come a shelf in the bathroom and some towell bars. We have several other things in mind as we move forward. But in all of that, we do need to locate and buy a tow truck.

We have both been a little surprised by just how excited we are with this new adventure!

Yesterday we sold the motorhome! We have owned this one since May 4, 1998 and have not been

But the search for a new one has begun. We first have to figure out what we want next, which is still up in the air. Once we know that, we will start to shop in earnest. We are presently leaning toward a smaller trailer and a small truck, but nothing at all has been decided as yet. On Friday we will be going to the Dallas RV Show to start serious research!

We didn't get quite as much for it as we wanted, but I guess that is to be expected. Somewhat less than retail but more than dealer trade-in.  So now we go bargain hunting!