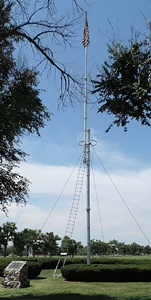 This week we visited Fort Robinson, NE which is one of the best preserved of the forts built to take part in the Indian wars. The fort is now a

state park which it has been since the late 1950’s. It was begun as an outpost of Ft. Laramie, WY to protect the Red Cloud Indian agency in 1874. The Ninth & Tenth Cavalry, both black units and called Buffalo Soldiers by the plains Indians were stationed there, starting in 1885 for eighteen years. The current flagstaff was built in 1890 for the main parade ground.

It is the location where chief Crazy Horse was killed, and later was the scene of the “Cheyenne Uprising.” Some years later it was made the largest remount center for the US Army supplying both cavalry horses and draft animals to the artillery and quartermasters. By the start of WWII it was also the home of the training program for “War Dogs” which was the first use of dogs in combat by the Army. During WWII there was also a POW camp constructed there which eventually housed more than 3,000 German POW’s. 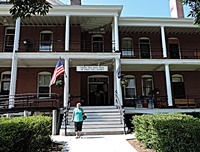 Today the park houses three different museums, has two large campgrounds, an active playhouse, riding stables, stagecoach rides, horse drawn tours, bike rentals, walking tours, campfire programs and many other activities. There are buildings of the former housing areas which are available for visitor rentals as are the officer quarters. The main cavalry barracks now hoses a gift shop, restaurant, and some rooms for rental. Some of the former remount stables are now available for rental of those who travel with horses and there are miles of trails to ride.  Another interesting stop is the original Ft. 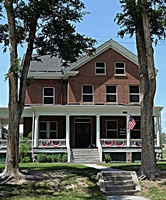 Cemetery, which is still there with most of the stones, even though the military graves were moved to Ft. McPherson National Cemetery in 1948.

There are tours of the park available or you can drive your private auto through most of the areas as long as ou stay on the roads. The park is home to a heard of buffalo and bighorn sheep have been reintroduced to the bluffs along the ridges of the park, although they are seldom seen by visitors. The coyote, NE state animal is pretty common. 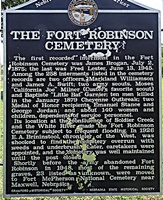 Most of the buildings are original to the post with the period of construction ranging over the life of the fort. Because the post was never totally abandoned there are far more of the buildings still remaining, although some were destroyed to eliminate the need for maintenance in the priod that it was controled by the USDA. Today there are efforts underway to replace the ones of historic significance that were previously destroyed. The base chapple is now in use as a church located in Crawford, where it was moved after being surplussed.

The fort is of special interest to me as my father’s older brother was a soldier who was stationed there for several years in the period of about 1922 to 1925. While visiting the historical society museum I was given the email for a person who was historian there and who has custody now of the fort’s personnel records. Because my uncle was medically discharged and sent home to die, it would be very interesting to see if more can be learned about him as my father actually knew very little.

Ft. Robinson is locates near Crawford, NE and on US20. It is near the border with South Dakota and a short distsnce from the Black Hills.